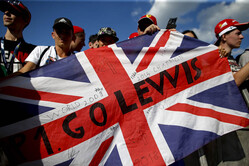 Having previously voiced his concern at the direction the sport might be taking post-2021, Lewis Hamilton and the Grand Prix Drivers' Association were invited to attend subsequent meetings with the teams and the sport's powers-that-be as they fine-tune the rules package.

However, while some teams are concerned at the sport's DNA being compromised by standardised parts, and Mercedes calls on the engine rules to be left alone as power unit performance converges, others fear the new rules are too prescriptive.

Having already blasted the idea of reverse grids in a bid to 'ensure' closer racing, Hamilton believes that the proposal is being put out there in case the new rules package doesn't level the playing field as much as the powers-that-be desire.

"The changes they've made in previous years have not been particularly effective," he told reporters in Sochi, "so they are probably not confident with any decision-making process.

"I don't know," he continued. "It's not an easy job. There's a lot of people involved in the decision-making process. Us drivers are trying to have more of an impact and more of a role in helping them make a better decision but it doesn't seem to have made much difference.

"The fact they are trying to reverse grids and all that seems to me like an excuse for not doing a good enough job in the decision process," he said. "Why are they making the cars heavier? There's no reason, it's not safer, it's not better for racing.

"My points are still the same," he insisted. "I'm still concerned. And I don't think that's going to change from what I've witnessed in the meeting."

Referring again to the increased weight, he said: "I don't see the point of it... and we're going slower as well.

"Why does F1 want to go slower? We're supposed to be moving forward with technology and innovating, we should be faster. We're going to worse tyres, heavier cars, more sluggish... but when you speak to these guys they just don't understand.

"Pretty much all of them haven't raced before or been in a Formula 1 car," he sighed. "But that's how it's always been."