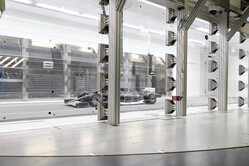 As Brexit sees the UK government descend further and further into chaos, Formula One has its own October deadline to deal with.

While most are agreed on some aspects of the regulation changes planned for 2021, as we get nearer the (second) deadline, an increasing number of dissenting voices can be heard.

Ferrari has voiced its concern at the move towards more standard parts, while Mercedes boss, Toto Wolff believes the engine regulations should be left alone as the performance levels between the different engines begins to converge.

Now, as F1 issues further details of the proposed look of 2021, revealing that the example shown in its windtunnel test a few weeks ago is now being updated with "futuristic" wings and the like, a number of team bosses have voiced their concern that the design regulations are becoming "too prescriptive".

"I doubt there's any aero department that's read those rules and got particularly excited about them," says Christian Horner. "For any aerodynamicist, prescriptive design is not in their DNA.

"(When) some of the regulations were released I think and there were probably a few long faces in the aero department, but that's not just unique to Red Bull and our strengths over the last few years hasn't purely been solely down to aerodynamics.

"It's more digesting those rules, they raise some questions which will no doubt be put forward in the coming meetings which we seem to have endless amounts of and yeah, we will see where they end up."

"Too prescriptive. Yeah, I would say so," added Guenther Steiner. "The budget cap should regulate that the budget cap and the aero development, they can probably use the wind tunnel and CFD just for a limited time should be so it's a little bit close but maybe in the beginning it's good that we're not going too far.

"I think we wait a few weeks until the aero people have got their proper comments because now they act emotionally about it but they will find a way around what they are doing anyway. My opinion is not set yet."

"I'm just a bit scared that if the room of freedom is too small at the end we will end up with like a monotype," said Fred Vasseur, "but it won't be a monotype and we will have to spend millions for this."

"I would like to see more freedom expressed," admitted Zak Brown, "so when you have the budget cap then you're fixed on how much you can spend and if the rules were a little bit more opened up, whether it was aerodynamics or others, then you'd have some more choices to make and you might see cars coming out looking a little bit more differently than they do today, because you could chose where you think you're going to get your competitive advantage.

"That being said, all the engineers in this sport are pretty clever people and so they will figure out areas where they think they can make a differences, so I think it will still be a strong engineering exercise but opened up rules - because the budget cap kind of stops you from just spending - maybe doesn't require that same level of restrictiveness, because you've got that seal that is set for you."

Not for the first time, Renault appeared to be out-of-step with its rivals.

"Looking at 2021, it's going to be such a step change I think it's not bad to start with some things that are fairly prescriptive," said Cyril Abiteboul, "and according to the result that we see, then to progressively open up because the world is not going to stop in 2021, there will be years after that, we will have to come up with evolution like always to the regulations and it will always be the time to free up a bit.

"We still have our aerodynamic capacity and departments' strengths and weaknesses so it will still be a possibility but I think we need to be careful because last time there was such a massive change to regulations - it was 2014 - and that created a cycle that I understand people criticised a lot for the fact that it locked up a performance differentiator so that's why I think it's not bad to do that initially and open up."