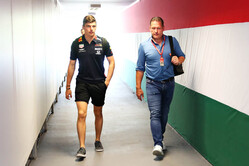 While, other than its in-house squabbling, Ferrari has gone from strength to strength since the summer break ended, scoring three successive wins, and so very nearly a fourth, Red Bull's challenge has somewhat fizzled out.

Seen as a shoo-in for victory in Singapore, the Austrian team, and star driver Max Verstappen, have, instead been almost reduced to the role of bit-part players, taking the meagre scraps that Mercedes and Ferrari leave on the table.

Showing no visible improvement since the summer, Jos Verstappen fears his son could face having his hopes dashed again in 2020.

"We should have been closer," he told Ziggo Sport's Peptalk, "but that is more difficult than we thought.

"It's very frustrating," he admitted. "In the last races before the summer break it went really well, but after the break we did not progress while the other teams have.

"Max cannot change that, we depend on the team, the car is a bit behind, the engine is a bit behind, more work has to be done on this combination if we want to challenge for the title next year.

"We are very concerned there won't be any improvement in the short term," he continued, "we depend on the equipment we get and at the moment it is not good enough.

"Put him in a good car and he will challenge for the world championship, but it still does not look that we will be able to challenge next year.

"The expectation was to close the gap to the competition, but at the moment it does not look like it. We have to work hard to close the gap, otherwise next year will be lost too."