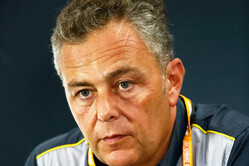 Laurent, if we could start with you please. Ferrari have had a tremendous run since the summer break but can we start by talking about the Singapore Grand Prix. Lots of upgrades on your car. Were you surprised - at all surprised - by the impact they had?
Laurent Mekies: Well, you know, like you say, we brought a lot of new parts to Singapore, so you are always hoping they will perform at best. If anything, yes, we were a bit surprised to be able to close the gap as much as we did. Nonetheless, we are conscious that the gaps are very small. These guys [Mercedes] or these guys [Red Bull Racing] could have won the race equally, so it was just good to be back in the fight there, and here I guess we'll have another good data point to understand if it's going to be the case everywhere or if it's going to be a lot more work needed.

Q: How tight was the call to pit Sebastian on Lap 19. What did you see on the data that led to that decision?
LM: I think from a strategy point of view, it was clear that we had to pit that lap, and that's the call the guys made and that was good. Obviously, what surprised everybody is that the undercut, so-called now, was very, very powerful, to the extent that we ended up not only in front of Lewis but also in front of Charles. I think the important thing is that it put both our cars in the lead.

Q: James, while we're talking about Singapore, it was clear to Ferrari to pit Sebastian on lap 19. Why didn't you do the same?
James Allison: It wasn't maybe quite so clear to us! I think the thing that surprised Laurent also surprised us, which is just the dramatic power of that undercut. Had we better anticipated that it would have been clear also to us.

Q: Can we expect a more aggressive strategy from Mercedes this weekend?
JA: No, not necessarily. I think everyone tries to play the strategy like a game of poker. You try to line the odds up in your favour. You can't make a winning move at every turn, you just try to do the thing that, nine times out of ten, is going to play out correctly. And that's not really a matter of aggression or being passive. It's just trying to figure out what is the best likely outcome.

Q: And did your car perform in line with expectations in Singapore?
JA: No. We were taken aback by the pace of our competition. It's an annoying business, Formula 1. You can think you're going to be good and then find that you get a whipping. We were pretty much where we thought we'd be on race pace but, in Singapore, if you don't put it on pole, then you line up to be beaten - and that's what happened.

Q: Paul: you saw what Ferrari saw. How clear was it to you to pit Max on the same lap as Sebastian?
Paul Monaghan: Pretty clear. Max was quite vocal in his assessment of the situation we found ourselves in so we got on with it and pitted him.

Q: You went to Singapore as one of the pre-race favourites - so was your car performing in line with expectations or...?
PM: Well, it depends how you claim your expectations. We were not as quick as we'd hoped to be, relative to our opposition. So, if our car performed to its limit, the others were better than us. A little bit disappointed and you lick your wounds and move on, don't you? You don't dwell on the race, you learn from it, and we hope we bring the lessons here in subsequent races and into next year.

Q: While we're talking Singapore Mario, just quick question for you, did the three Safety Car periods help to keep the Hard tyre alive? Without them, would it have been a two-stop race?
Mario Isola: It's difficult to reply to your question because, as usual, the Hard tyre is not tested for long stints during the free practice, so we can just make estimation - but it happens often during the race that we have a different scenario. So yes, on the paper, it should have lasted for all the race but in terms of performance, and keeping the performance to the end of the race, it's difficult. Obviously the Safety Car is helping the performance life of the tyre. With the Hard tyre, it could have been difficult to switch-on the tyre, a worn tyre, after the Safety Car but they were able to do that - so happy with the final result.

Q: Laurent, back to you. Any reason to think you can't make it four in a row this weekend?
LM: Well, you know, as we said, Singapore was for sure a good result and as you said, Spa and Monza were also good races - but if you look carefully, it was extremely tight in Spa, that's the reality of it. It was extremely tight in Monza, we had these guys behind us for 50 laps. It was better than expected in Singapore, with everything that is so specific about Singapore. So, here will be, I guess, a real answer for us when it comes to what's going to be the pace from now until the end of the season.

Q: James, this weekend, your competitiveness relative to Ferrari in particular?
JA: I think it would be a brave man who would put his house on any one of these three teams because it looks pretty challengingly close at the front. So, I have no idea. We're going to have to work well in FP2 and FP3 to be able to do well in qualifying and in the race. At the moment, it's too difficult to say whether that's going to happen - which I guess is fun for everyone else but a bit more stressful for us.

Q: Paul, this weekend you're taking a lot of penalties. I suppose with Suzuka in mind. How important is it for Red Bull to perform well in Japan, home race of Honda?
PM: Well, we haven't taken penalties here solely for Suzuka. We are in our first year with Honda and, if you look at it, we've not had an engine fail or anything like that. All the engines in the pool are still there. As part of the programme to get ourselves more competitive, we've opted to take just five places here. It will dent us from necessarily being with these guys on lap one - but it's looking beyond Suzuka, we're into next year. It would be nice for us to go well in Suzuka, wouldn't it? But I dare say the gentlemen to my left will have something to say about that.

Q: Mario, its recently been confirmed there will be an extra tyre test in October for next year. Which teams are going to participate in that test and what are you expecting to achieve at that test.
MI: The target of the test is to finalise the development for 2020. We had some addition requests in June and July, so it was difficult to change our development at that time and we made a proposal to have an extra test to test a new compound with a wider working range, especially on the Hard levels. That is not possible in Paul Ricard - that was the last test in September - and, luckily, three guys were available to run the test, so we will have one day each, Mercedes, Ferrari and Red Bull. That is a very good opportunity for us to finalise the product for next year.

Q: (Scott Mitchell - Autosport) To James, Laurent and Paul. We don't have the finalised 2021 rules yet. We've had bits to look at, things that may or may not change. How much progress or exploration have you been able to do with these rules and how intense is that going to make it behind the scenes now you've got this season to finish, 2020 to focus on and then a big rule change in 2021?
JA: Well, big rule changes are pretty challenging whenever they come. This one is certainly, drafted is a lot, lot bigger than most and that will make it extra-specially challenging. I would say that, however, the precise nature of those rules is still being discussed. And so the actual amount of work that can be done right now is relatively limited because, precisely where those rules shake out is not yet fixed. But it's going to be difficult.

LM: Yeah, I think on that front we have been pretty much repeating the same thing all the way through. You know, it's... we have a very good show right now and we are always a little bit cautious about having such a big change of the magnitude that James describes coming - because there could be a lot of unintended consequences and it's something that we are still obviously discussing with the stakeholders to make sure we don't end up with something that is not as good as what we have now. So, as far as Ferrari is concerned, we always felt that Formula 1 DNA was having very different cars and therefore the idea of having some areas very much standardised and some other areas with more limitation is something that we are still hoping to get into better place for 2021.

PM: To answer your question directly, it's a big challenge, isn't it? We want to challenge these guys next, we are obliged to look at the 2021 regulations now and, as has been discussed, the negotiation is ongoing as to how they will fall out. So, our resources are being pushed and pulled in many directions and the change proposed for 2021 is enormous. It's not an evolution as we from '16 into '17, you may argue, and yeah, it's going to be mighty challenging.