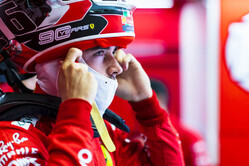 Having lost the lead due to a combination of his team's strategy, the race pace he was dictating from the front and a couple of barnstorming laps from his teammate, Charles Leclerc spent the remainder of last Sunday afternoon letting Ferrari - and the rest of the world - know exactly how he felt about it.

Obeying team orders to keep his head down and bring the car home, at race end the youngster's face was like thunder, barely acknowledging his teammate, far less his win.

However, a few hours later, after back room talks and having viewed the situation the Monegasque said he understood why his team did what it did.

Speaking ahead of this weekend's Russian Grand Prix, Leclerc admits to having over reacted and being over emotional, and as a result aims to keep future radio calls to the very minimum.

"I believe my reaction was well over what it should be," the youngster told reporters in Sochi. "That shows I've still got a lot to learn.

"On that, I definitely have a lot to learn and a lot to improve. But that won't happen again in the future."

Asked about the team's strategy, and whether it should have done things differently, he said: "I don't think they could, because re-looking at the strategy I think nobody expected the tyre gap and, also, Seb has done an amazing out lap. I don't think anybody expected him to pass in front.

"If Seb was seven seconds behind and he will try the undercut, there's no need for me to know. I just think we were not expecting him to pass in front of me."

Asked if in future he will try to vent his frustration at himself and not over the radio, he smiled and replied: "That's definitely the goal.

"In the car it's always very difficult, there's a lot of adrenaline. I wake up in the morning thinking about victory and I go to sleep thinking about victory. So sometimes it might be hard, but I need to control myself more in these situations and just shut up instead of speaking on the radio."