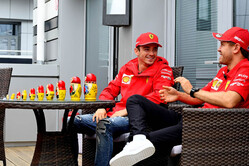 Before the chequered flag had even been raised, Ferrari's media department was already working harder than the power unit in the back of Sebastian Vettel's SF90, as the Maranello outfit sought to put a lid on simmering tensions within the team.

A few days later, and as Leclerc admits he over reacted, and that in future he will seek to keep such thoughts to himself, teammate Vettel admitted that he understood the youngster's frustration.

"I don't think that you should interpret too much from the messages because we are driving when we are opening the radio," the German told reporters, "and if you would do the same exercise with any footballer or even a golfer, you'd be surprised.

"There's no point trying to understand the reason behind everything that people say when they are 'in the moment'," he continued, "it's pretty normal and obviously he wanted to win.

"He was upset when he realised he was behind, which, if it was the other way around, I probably would have been equally as upset.

"I spoke with him, I didn't speak much about the race," he added.

"I don't think the undercut story will become nasty, answering all your questions," he said, a clear reference to those sections of the media determined to make the most of any potential feud. "I don't think there is much to elaborate on. We did the race and it was clear what happened. Charles is challenging myself, I'm challenging him.

"There's only one space on the top step and if you fight for the victory, ultimately, you're not as pleased as the other guy if one takes first and one takes second. That's the nature of our sport."