It was not good enough, says Verstappen 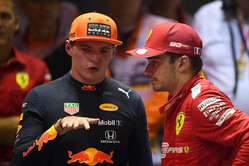 On a day when a number of drivers appeared to giving Romain Grosjean a run for his money as the biggest moaner on the grid, Max Verstappen was up there with the best of them.

Just a few days ago the Dutchman and his team were considered favourites to win in Singapore, the circuit ideally suited to the RB15.

However, despite setting a strong pace on Friday, it all began to go downhill come Saturday, and it was only Mercedes strategic indecision that eventually helped Verstappen claim the final podium place.

"It was not good enough," he subsequently told reporters. "We came here to win and we clearly didn't.

"I would say it's a little wake up call," he continued. "From Austria onwards I would say it's our worst race in terms of performance where we expected to be really good.

"I have a few ideas why it went wrong," he added, "so we will analyse all of them and see if we can already be better at Sochi. The layout is not amazing for us but you can clearly see if the car is working through corners or not.

"I think here, clearly in two corners, the car was not working like I wanted it to, so we will go away and see what we can do better."

Asked about the late challenge from Lewis Hamilton, he insisted that he never felt under serious threat.

"It really started with four laps to go and then you could really see Lewis closing in, so I just had to make sure I had some good exits out of the crucial corners where I knew he was going to be quick and we managed to do that.

"I guess the people in the garage were a bit wobbly," he smiled, "I was just focusing on getting good exits."