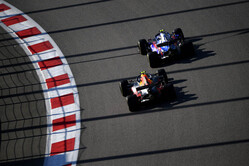 Max Verstappen: "I think P4 was the best possible result today and we had a little bit of luck with Seb retiring, but I'm satisfied with the points we scored considering the penalties and pace of Ferrari and Mercedes. There wasn't too much going on for me once I cleared the mid-field traffic and from there I had a bit of a lonely race until the Safety Car closed us all up. We were clearly a bit slower than the top three today but at the end of the race it was also more difficult being on the medium compound tyre when the others were on the soft. For sure we maximised the result but of course we want to be scoring more podiums and victories so we still have work to do as the others are very strong. Now I'm looking forward to Suzuka and we want to do the best we can for all the Japanese fans at Honda's home race."

Alex Albon: "It was a good race and I think P5 is the best we could have done. I wanted to bounce back and get a good result after yesterday's crash so I'm really happy with how the race went, although we probably got a bit lucky with the Safety Car. Morale was obviously a little bit low on Saturday night and it was a lot of work for the Team so this result is for them. Starting from the pit lane was never going to be easy but the pace was quite strong on the softs and it was a good haul of points. I started out of position and had some fun coming back through the field, but I don't want all of my races to be like that. I like boring races too so I'm hoping for a cleaner and smoother weekend in Japan. In the first stint I was struggling to get past Daniil and Pierre and it took me a long time. The downforce loss is immense when you're following in a train of cars which I think is because the track is designed a bit like a street circuit. Up to the race it had been a tough weekend but I'm getting more comfortable. I just need to get up to speed and in a rhythm earlier on in the weekend, but that will come with more laps and time in the car. With the exception of Abu Dhabi, all of the remaining tracks will be new for me so Suzuka will be difficult, but I like new tracks."

Christian Horner: "It was a good performance from both of our drivers today. For Max, P4 was the maximum on the table having started from P9 and he made some great moves early in the race to move up the order. His pace at the end of the race was respectable but not quite enough to challenge the top three. Meanwhile Alex, who started from the pit lane, performed well to make his way through the field, making some great overtakes in what was another mature drive. To finish up in P5 was an impressive race from him and fourth and fifth was probably the maximum achievable for us today. We now look forward to the Japanese Grand Prix, Honda's home race."