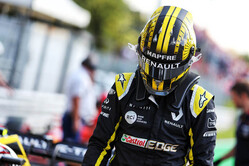 While many are still recovering from the shock decision by Haas to retain Romain Grosjean for a fifth season, the driver hardest hit by the move, Nico Hulkenberg, appears to have more and more doors closing on him.

Present at the FIA press conference were two team bosses who each have yet to confirm their 2020 line-ups, but both admitted that Hulkenberg is not on their radar.

"Nico isn't on our list," admitted Christian Horner. "He's a great driver and it would be a great shame not to see him continue in Formula 1 next year," he added.

"He's a professional driver that arguably hasn't achieved his potential in Formula 1," he continued, "and I very much hope for him that he does find a seat because he's better than some other drivers that are on the grid and he should be in Formula 1."

"We are focused with Antonio," said Fred Vasseur, referring to Antonio Giovinazzi, who also has the backing of Ferrari. "He had a very tough weekend in Spa but a strong recovery the week after in Monza. We want to help him to develop and continue to improve. It will be time to discuss about the future but I am really focused on Antonio, that I think he is doing, step-by-step, a good job."

Meanwhile, having effectively ruled out a return to Williams, with which he made his F1 debut in 2010, it appears the feeling is mutual at Grove.

"We’ve got a number of candidates on our list," said Claire Williams. "Nico started his career with Williams but we haven’t had a conversation."

Asked whether the team might benefit from an experienced driver, like Hulkenberg, alongside George Russell, who is certain to be retained, she said that there is no reason why a relatively inexperienced youngster couldn't lead a team.

"George is the perfect example of the work he has done for us this year," she said.

Meanwhile, Guenther Steiner, when asked about Grosjean's weaknesses, appeared to sum up the mood of much of the paddock.

"Weakness... where should I start!" he joked.

"No. Romain's been with us a long time and we looked at ourselves and in the moment the drivers are not our issue, it's the car. So in the end we decided to focus on the car and keep the other things stable and therefore we resigned Romain for another year.

"We know his weaknesses," he continued, "a lot of people know that he has very big highs and very big lows as well. So, hopefully it's time to change. I'm waiting for that and maybe next year is a good year."