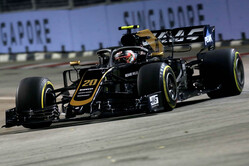 The 15th round of the 2019 FIA Formula One World Championship began with practice Friday on the Marina Bay Street Circuit as teams prepared for Sunday's Singapore Grand Prix.

Two 90-minute sessions - FP1 and FP2 - on the 5.063-kilometer (3.146-mile), 23-turn temporary circuit began under overcast conditions in the twilight and concluded in warm, humid conditions during the night session.

Grosjean started FP2 with a short run on White hard tires. He swapped for a set of new softs to set his fast lap of 1:41.392 placing him 17th overall. He finished with another distance run, starting on softs before a switch to the hard compound. He completed 26 laps during the session. Magnussen started FP2 on mediums, then turned his fast lap of 1:41.564 on new softs on his 13th lap. He then executed a distance run commencing on softs then switching to mediums on his way to logging 30 laps by the checkered flag.

Romain Grosjean: "It hasn't been easy today. We know Singapore is a tough circuit and it can expose your weaknesses. We've tried our best today but there's obviously some work we need to do for tomorrow and Sunday. At the minute it doesn't look like being an easy one. Saying that, sometimes you find the little things that make a big chunk of lap time, especially on a street circuit. I'm not writing everything off, we're just going to work hard and hopefully come back stronger tomorrow."

Kevin Magnussen: "It was a little bit difficult today. We weren't very fast, lots of sliding around, we don't look fantastic. You never know, maybe things will change tomorrow, we've seen that before - but that's all we can hope for. We'll obviously do our best to see if we can find the issues, but at the moment it doesn't look great. It's very hot here, we need to cool the car a lot, so the aero spec is a bit different because of that. There are a lot of variables, a lot of things that could play into this lack of performance. It's not easy to say these things, but we'll work hard tonight."

Guenther Steiner: "Not an ideal day, as we can see. We just need to work now to find some solutions for tomorrow. FP1, it's always difficult to judge anything anyway, because of all the different temperatures between that and the race. Then FP2, it just wasn't good. We need to look into it and hopefully come up with something for tomorrow. So, FP3 hopefully we learn something, then have a respectable qualifying."