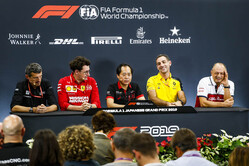 Q: Tomorrow's programme has been called due to the typhoon. Can we get your thoughts on that decision and could you explains how it has affected your programme today. Perhaps we can start with Fred?
Frederic Vasseur: I think that it's safety first and probably it makes no sense to ask the spectators to come on track and then to be in a big mess. In terms of schedule and programme for the team. We already thought about this yesterday evening honestly. OK, it will change the programme but I think we can afford the weekend with two free practices. Perhaps it will be a good exercise for the future.

Q: Thank you. Cyril?
Cyril Abiteboul: Well, nothing really to add. It has happened before and it will happen in the future. There is enough time on Sunday to conduct both qualifying and the race. I think maybe it will give us an impression of Formula E, maybe a little bit, so not a bad thing. That's for my neighbor on the left, and on the right.

Q: Mattia?
Mattia Binotto: I would join certainly his comment, as first I think it's a shame for the fans but it's a fully respectable decision, safety is first. In terms of programmes, certainly it's a lot more intense now. We are certainly skipping one session, which is FP3. Qualifying may be occurring on Sunday morning. But it means that today it will be a lot more intense. We've got, eventually, more tyres to be used - the ones from FP3. We need to set up the car for the Quali on Sunday morning. There's just a session less. Things are more complicated but certainly a great challenge but I'm pretty sure it should be a good show and spectacle on Sunday.

Q: Guenther?
Guenther Steiner: Nothing to add from a sporting side. I think it was the right decision from the organisers, safety is first, and the rest is set.

Q: Thank you gentlemen. Tanabe-san, if I could come back to you, please? It's always special to race here at Suzuka and Honda has a good chance of getting a good result this weekend. How exciting is it to be in that situation?
TT: Yes, it is a very special race. The Japanese Grand Prix is our home race, and then the Suzuka circuit is owned by Honda. All Japanese fans are willing it to have a good result from Honda-powered cars. On the other hand, it's kind of pressure for us, but fans give us more power. In terms of the weekend preparation, the setting is the same as the other races. So, we just set up the PU accordingly and do our best.

Q: Can we get a word too on the performance of Naoki Yamamoto this morning in the Toro Rosso. He was only one tenth slower than Dany Kvyat. How would you assess his performance today?
TT: Considering it's his first run on a grand prix weekend I think he did a good job. Comparing the lap time against Dany is a bit difficult because they are doing different strategy in the practice. But he did a decent job for the team to set up the car in the first session of the weekend and then his run today will definitely encourage Japanese young drivers. So, thank you Toro Rosso and Red Bull and it's good for the Japanese fans as well.

Q: Thank you. Fred, coming back to you: there are five races left this year, so when you look back at this season, has it been a success?
FV: It was a really up and down season. We had the first four or five races where we scored a lot of points and then we had a bad momentum around Monaco and Barcelona and then we went back. The last four races were very difficult. It's up and down. But let's see in the last five if it's up and hopefully the last five will be OK.

Q: What can you do to level out the performances?
FV: It's small things and small details honestly. If you compare with Sochi that we were, with Antonio, we were P13 in Quali but we were two tenths off compared to P7 in Q2 and it's very, very tight and for small details sometimes you can be completely out of the classification but we have to take care when you are doing the analysis. But it's true also that we made too many mistakes over the last three or four weekends - teams, drivers, everyone in the same basket - but at the end of the day we have to wake up a little bit and to come back to the pace and top score points in the last four events.

Q: And how has the experience of Kimi Räikkönen helped the team?
FV: He's staying calm. He's not a big nervous. I think it's good also for us to stay focused on the real issue and not to start to try to go in every single direction. We know what did wrong on the last two or three events and I hope that we will be able to correct it for Suzuka and the next ones, and that's it.

Q: Guenther, if we could come to you now please. In Russia, Kevin Magnussen scored his first points since the German Grand Prix. What aero was he running on his car that weekend and is that the direction going forward?
GS: I don't know what aero he was running because we are mixing it up a little bit. There is no definitive spec what we could call it. It's a hybrid, we call it and, going forward, in the moment we are on a very similar spec like we had in Russia. Going forward, we test a few things and I cannot tell you what we do in the next race because we just try to get better and get a better understanding so we are not in this position next year. But, I mean, it seemed to be working a little bit better in Russia. So, let's hope we can find a few more points on our way to the end of the season.

Q: Knowing what you know now, what would you have done differently with the development of this year's car?
GS: A lot. It's like... I don't want to go into the specifics of technical stuff but we should have listened a little bit more to the drivers when they gave their opinion about what the car is doing and whatnot. And sometimes listen more to drivers than look at numbers. That's what we have to learn out of this. And now I think we need to get what drivers say correlated with what the numbers say and get an understanding so we can move forward. As I said, we would have done a lot different from Barcelona onwards.

Q: Cyril, tell us about the progress with your car, particularly this weekend, and what feedback you've had from your drivers about the new front wing?
CA: It's as always when you bring this type of parts, in particular with these current regulations, it's a very sensitive part. I think everyone here would say the same thing. So, it always takes a little bit of time to understand properly, to measure, we've done a number of back-to-back tests. The guys are currently looking at the data at the factory - and also listening to drivers, Guenther, we are also doing that - and no, there is nothing really bad but I think there is more to come in pace and in balance in particular. But this is a very complex area of development of the car. It's highly loaded so it creates some instability. It's complex.

Q: Can you tell us any more about what the drivers were saying about the car this morning?
CA: I don't want to go into specifics but I think the balance was not exactly where it was supposed to be, so we need to review that in particular, make sure that the data do back up what they were experiencing on track. And if that does, we'll be making some set-up change in FP2 to see if we can indeed get it to work a bit better.

Q: OK, and looking a bit further ahead, it looks like you won't be supplying any customer teams in 2021. How will that impact on your power unit development?
CA: In particular for next year there is no impact because the engine for next year is done, it's on the dyno already, you know that it's a long lead-time development, so nothing is going to impact what we are doing for 2020. It's going to impact what we could be doing for 2021 on the basis that, when you have multiple customers, in particular the way that Renault is doing it, we always try to satisfy everyone to take on board all the comments in terms of installation, and so on and so forth, so that will be one less distraction. We will be able to focus on ourselves and just on ourselves. And that's it. From an economic perspective, there is absolutely no impact and nothing in it, because we sell, more or less, at a cost. Due to the price cap limitation. So, frankly, it's nothing, that it's good news, because, you know, it's always satisfying to see your product being used by multiple teams but in terms of what we need to achieve and deliver for Renault it has absolutely no impact.

Q: Mattia, we understood from Charles yesterday that you spoke to both drivers in Maranello last week. How confident are you that another situation like the one we saw in Russia won't arise again?
MB: First, it's not the first time we are speaking in Maranello. It's true that I met both of them this week, they were in Maranello for some activities: simulator etc., I think we had positive, constructive, honest, fair, transparent discussions with both of them, individuals. I think what happened in Sochi, nothing really bad but certainly something that needs to be improved and addressed and I think it's only an opportunity of lesson learned and trying to do better in the future. But how much I'm confident it will not happen, I'm not at all. I think these are both very good drivers. They are all going for a single objective which is winning themselves but I think what again is more important is that at least we between us we've got clarity and fairness and I think that's key.

Q: You say they're both very competitive drivers. What have you learnt about Sebastian and Charles over the last two grand prix weekends?
MB: I think that they are both performing very well and, as I've often said this season, it's somehow a luxury for a team principal having this situation. I'm very pleased for the racing performance of Sebastian, as I am for the one of Charles since, let's say, the start of the season and his progresses. What I've learned, that we've got a very competitive line-up. But I don't think I learned it. It's not a surprise, it's something on which we're simply happy.