Teams fear rules delay will mean 2021 designs will be "rough" 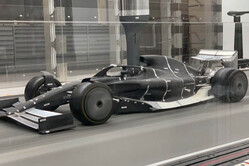 With almost all the teams now switching focus to 2020, and some already planning to start testing components, spare a thought for the fact that they still have no solid foundation for their 2021 designs.

With the 2021 rules deadline just weeks away, but still many areas on which the teams disagree, Ferrari sporting director Laurent Mekies, admits that rather than the aggressive, jaw-dropping, poster on the wall look F1 is promising, some of the designs will be a little rough.

"We could make up the time for most of the items," he said of the delay to finalise the regulations, "you will just deliver something a bit more rough and I think in that specific case it's probably more important that we get the regulations right, even if it comes at a later stage, even.

"If it means something is delayed to the following years than to have something early that we have then not happy with," he added.

"There's always enough time," added James Allison, "it just depends on the quality of what you do changes, depending on how much time you have.

"There was a time, I'm sure you remember, where the Brawn team managed to put a brand new engine in their car and win a championship in a matter of a few weeks, because they had to do it. So you can do a lot of things in a short amount of time but the standard lead-time for working on a new car is a little over a year so you want to be working sort of November/December of the year before the year before so 14 months or so.

"It would be preferable to have rules that we all agree on before we embark," admitted Red Bull's, Paul Monaghan. "If that pushes it back a little bit, we can still do a car and whoever's finger is lucky in the air may well be lucky at the start of the season, you never know.

"It would also depend on how we chose to divvy up our resources for the 2020 car. So we have our own resources to deploy and the time question, well, it's the same for all of us once we get going and we'll do it."

In terms of the magnitude of the 2021 rules overhaul and the fact that some teams, particularly the big three, fear they go too far, Mekies fears that too big a change could have unintended consequences.

"On that front we have been pretty much repeating the same thing all the way through," said the Frenchman. "We have a very good show right now and we are always a little bit cautious about having such a big change of the magnitude, because there could be a lot of unintended consequences and it's something that we are still obviously discussing with the stakeholders to make sure we don't end up with something that is not as good as what we have now.

"So, as far as Ferrari is concerned, we always felt that Formula 1 DNA was having very different cars and therefore the idea of having some areas very much standardised and some other areas with more limitation is something that we are still hoping to get into better place for 2021."

Asked to expand on those "unintended consequences", he said: "We are completely in favour of things that could reduce cost, financial regulations and budget cap and so on.

"We could also add that, ironically, to get ready for these 2021 regulations has actually a significant cost implication when it comes to the R&D work that needs to be done. You have to run different programmes in parallel and it comes at a cost."

"We have concerns over the draft regulations," admitted Monaghan. "As has been discussed, the negotiation is ongoing and if we don't participate we can't influence it. If we have concerns, we will raise them. If they are the same as Ferrari's then it probably adds to the argument. But yes, there are concerns as to the nature of the rules and the drafting thereof."

"The discussions about what the regulations will be are still ongoing," said Allison, "so you don't want to get into too much detail, but the concerns do all fall in the striking the right balance between the desire of a team to be able to produce performance by good design, by good engineering and the desire of the sport to equalise out things.

"The sport is, to a degree, a Darwinian competition and that's part of its spice and there needs to be a good balance struck between the desire of the individual teams to fight for their best opportunities and the desire maybe of the owners to level everything out and have it that sort of any team on any day could win."