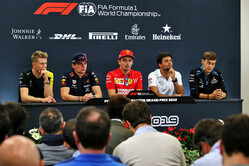 George, you haven't raced at Suzuka before, so how excited are you about what lies in store this weekend?
George Russell: Yeah, extremely excited. It's a circuit I've been looking forward to driving for years actually. It's actually one of the best and purest out there, so just hoping we don't get rained off tomorrow or Saturday.

Can we take stock and reflect on your first season in Formula 1. What have you learned and has F1 met your pre-season expectations?
GR: I think it has met my pre-season expectations, just the whole Formula 1 rollercoaster itself. I wasn't 100% sure what to expect but I'm really happy with how the season has gone generally. From the good moments personally to the tougher times I wouldn't change anything at all because especially from the tougher times I've learned a huge amount and generally being in the position I have been, at the back of the grid, it's given me an opportunity to just explore a bit more and go under the radar and hopefully that will help me out in years to come when we should be fighting.

Thanks, enjoy the weekend ahead and good luck. Max, Hondas home race this weekend. Has it been a particularly busy build-up for you?
Max Verstappen: Yeah, yeah it has been. On Tuesday the whole day. But actually I got to drive the very first Honda F1 car so that was actually quite cool. But I guess it's more than normal that you start a bit early this week with some commitments.

And how was the RA272, the car with which Honda won that Mexican Grand Prix back in 1965?
MV: I didn't fit in very well; I was a bit stuck. It was just a really cool experience.

Now let's throw it forward to this weekend. What can we expect from you and Red Bull. You've scored a podium for the last three years at Suzuka. Given a clean race is a fourth consecutive podium realistic?
MV: That's definitely the target. First, also, let's wait and see how the weekend is going to go and also with the weather, but of course we'll try to do our very best this weekend to have a good result.

Thanks. Nico, you've enjoyed a purple patch recently and you've reached Q3 in the last four races. You've also go a new front wing this weekend, so what are you expecting from the car and from yourself this weekend?
Nico Hulkenberg: I think it's kind of the same build-up business as usual. Obviously we want to score as many points as possible on Sunday. We're still fighting in the championship and it's just about getting the maximum out of the car and ourselves, especially Saturday but Sunday.

And this new front wing?
NH: Yeah, it's new, so we'll see how that copes and if it brings something to the party or not.

OK, let's throw it further forward now. Lots of your fans are waiting to hear about your plans for next year. Has there been any movement? Is there anything you can say?
NH: No, frankly not. There's no news, so it's a little bit more of a patience game, so I'll have to and see a little bit longer.

Carlos, great race in Sochi for you and you're now looking to score your 50th points finish in Formula 1. How confident are you of achieving that this weekend at Suzuka?
Carlos Sainz: Fairly confident. I think this year whenever we have been doing solid weekends like we did in Russia we have been in a very strong position to score points. Those first three races at the beginning of the season and those first three races in the second half of the season that put us a bit on the back foot but hopefully after Sochi we are back to scoring points. I didn't know that stat, that 50th points scoring, but it would be a nice thing to do here in Suzuka.

You talk about some races that put you on the back foot. Well, you've already scored 66 points this year, which is more than any others season in your Formula 1 career. How much satisfaction does that give you?
CS: Yeah, it's quite a lot of satisfaction obviously because we didn't know coming into the year more or less where we were going to be so scoring so many points, seeing the hard work of the tea, paying off and putting together, whenever we're in the points, solid points finishes - P6s, P7s, P5s. It's really good news. We're still very far from where we want to be. We want to make good progress in the next couple of years but at least this year we made a very big step forward and that's a good starting point.

You say you want to make progress, well in 2021 McLaren are going to be using Mercedes power units. Your thoughts on that deal?
CS: Obviously it's a deal for the future. At the moment we are focused on our relationship with Renault, which honestly has helped us a lot - to realize our own problems and to realize where we need to work the most, thanks to last year's competitiveness with Renault and Red Bull we could judge our package better thanks to that engine and thanks to the progress Renault has done on this year's power unit we are actually scoring a lot of points. The Mercedes deal is part of the plan, to our road to recovery, let's put it like that, and hopefully that will also give us another good step.

Charles, thank you for waiting. You're top scorer in the last four races. How confident are you of Ferrari's performance this weekend?
Charles Leclerc: Yeah, it's working pretty well since we came back from holidays. The car feels great. We've had, I think, four poles in a row, which is always nice. The last two races have been a bit... not what I expected, but the performance is there, which is the most important, and there are no reasons for us not to be competitive this weekend. So, yeah, we'll see how it goes. I think we need to focus on the Friday especially. Saturday seems to be very tricky, if not impossible to drive, so Friday will be very important. And I hope we can have a very positive Sunday.

You say the last couple of races have been a bit tricky, obviously Russia didn't go as smoothly as you would have hoped. How were your discussions with the team and with Sebastian after the race?
CL: Yeah, obviously there was some misunderstanding from the car but I think we've had a discussion and everything is clear now. Obviously it felt like it was a huge deal from the outside - which it definitely wasn't but yeah, now everything is fine.

(Dan Knutson - Auto Action / Speed Sport) George, on paper, the car on race results is where it was at the start of the year - but how much has the car improved?
GR: It's definitely improved a lot, just in the driveability side of things. So, from within, it's definitely a nicer car to drive. It is obviously, always difficult to make huge leaps forward for any team but I think the foundations we have in place now are really positive going into next year. We're trialling a new front wing this weekend, which shouldn't necessarily bring much performance to this year's car but should hopefully unlock quite a lot for us moving into 2020, so I've got faith we should be fighting. Probably towards the lower end of the midfield but hopefully in the mix much more than we are at the moment.

(Frederic Ferret - L'Equipe) Question for Charles Leclerc. Sorry to come back to the subject. Did you have talks with Mattia Binotto and Seb Vettel since last race in Russia. Did you go to Maranello when Seb was there?
CL: No, unfortunately I had some things happening on the day he was in Maranello, so we didn't have the chance to meet-up together - but I had a meeting with Mattia and he had one with Seb the day earlier. Yeah, everything is fine, as I've said.

(Scott Mitchell - Autosport) To all five drivers please. At the moment we do have the topic of the typhoon that's expected to hit the area on Saturday. Obviously the FIA and F1 are monitoring the situation - but just from a drivers' perspective, you know what it's like driving these cars and these tyres in the wet. How much rain do you really need where it's a position where it's unsafe for you to go on track? Do you want to be consulted when it comes to deciding whether it goes ahead on Saturday?
NH: Yeah, I think we've seen in recent years that, in terms of rain, we don't need too much for it to be unsafe. Especially when you throw wind in there as well. It gets, I think, pretty tricky. We can obviously debate a lot and discuss but I think we just have to wait and see what actually hits us and how bad it is, or not, and make the right call at the time. Obviously there's a lot of fans here. We want to race; they want to see us drive. So, I think we need to try and make this weekend happen - but obviously we need to see what happens and we're at the mercy of the weather there.

Max?
MV: I've got my speedboat on standby so I'm ready to go for Saturday.

Max, would you like to see the drivers being consulted about the conditions?
MV: Yeah, I guess so, but it's going to be very clear anyway if it's possible or not. At the moment, it doesn't really look very likely on Saturday. Sunday looks fine. Yeah, let's see.

Charles?
CL: Yeah, as Max said, I think it's pretty clear if the typoon is going to come here there's no way we can drive but off my previous experience - and I've only done one year and a half in Formula One but they've always been quite safe with the conditions. So yeah, they've always asked what we thought about the track once we're in the car. So, yeah, happy. We will see.

And Carlos?
CS: Nothing to add. I have full trust in Michael and his team that we will run in safe conditions if we do so. Hockenheim is a good example. The first five laps of the race it was clearly a bit too wet and until the drivers there in the midfield, we didn't say it was safe enough, it wasn't clearly green flag. So, it's not a problem for me.

And George?
GR: Not much to add. As the guys said, it will be pretty clear come Saturday what the situation will be. I think we can handle quite a lot of water. It's just the standing puddles and the aquaplaning that is the biggest limitation for us. So, like Carlos said, I'm sure they'll make the right decision.