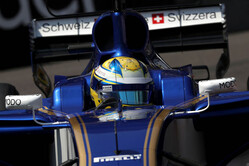 The Sauber F1 Team entered the 70 lap race at the Canadian GP with rather low expectations after the qualifying result on Saturday. In the end, Marcus Ericsson and Pascal Wehrlein finished in P13 and P15 at the Circuit Gilles Villeneuve in Montreal. Marcus Ericsson started on ultrasoft tyres and drove a one-stop strategy, while Pascal Wehrlein started from the pit lane on supersofts (2 pit stops) as a result of changing his rear wing after his accident in the qualifying. The two Sauber C36-Ferrari as well as the remaining cargo will now be flown from Montreal to Baku, where the Grand Prix of Azerbaijan will take place in two weeks.

Marcus Ericsson: "Overall it has been a tough weekend, but I got the maximum out of the car in the race. We made a step forward with our tyre management throughout the race. The pace that I had was similar to our direct competitors for most parts of the race. Now we have to build on that and take those insights with us to Baku."

Pascal Wehrlein: "It was a difficult weekend - for one because of the crash in the qualifying, and also because I could not keep up with the lap times of the competition. We have to make sure that we understand the reason for that. For now we are focusing on the upcoming weekend in Baku."

Monisha Kaltenborn, Team Principal: "Even though we anticipated that this would be a difficult race weekend, the result is still disappointing. Despite the challenging conditions, Marcus put in a good, consistent and dedicated performance. Pascal wasn't able to fully manage the tyres, and we are still in the process of analyzing the causes for that, especially regarding the changes in the aerodynamic configuration which we had to undertake before the race due to yesterday's incident."