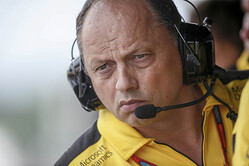 As was widely expected, the French manufacturer has had a difficult return to the F1 grid in its own right, and other than Kevin Magnussen's impressive drive to sixth in Russia has little to show for its efforts so far this season.

With the team's technical and engine departments already having switched focus to 2017, there is also the question of who will drive the cars next year.

Due to the shortcomings of the car, neither Magnussen nor Jolyon Palmer have been able to show what they are really capable of and team boss Fred Vasseur admits that this will be taken into account.

"It's not easy for them," he told the official F1 website. "They have been used to winning in the past and now they are cut off from that.

"I see both of them improving," he added. "Keep in mind that Jo is a rookie and Kevin did only one season before... and that was two years ago.

"Jo has been improving a lot," he continued, "true he spun in Hungary, but so far he did a good job. And that also goes for Kevin. Both have a very optimistic approach. They are a good support for the team."

As the team looks ahead to its first season 'proper', a season which could see James Allison recruited as Technical Director, Vasseur hints that he is seeking a special driver.

"If you look at the success stories of the past, success was always built around a driver," he said. "Schumacher and Ferrari, Vettel and Red Bull, Lewis and Mercedes and also Alonso and Renault, in the past, so the driver is important.

"A driver is not only about performance, but about being capable of leading a team. Right now we have more or less a thousand people in the team, if you take Viry and Enstone together, and that needs some sort of emotional leadership and that is the job for a driver! We need a driver who is super-motivated and able to super-motivate everybody else."

While, with all due respect, neither Magnussen nor Palmer appear to meet the criteria, Vasseur refused to write them off.

"They are improving!" he said. "We know we are on the grid, so ‘improving' is written in capital letters for us.

"It is too early to make any decision right here and now," he added, referring to next year's line-up. "We will probably do it at the beginning of September."

One of the names linked with the French team is Sergio Perez, while test driver Esteban Ocon, who makes his F1 debut with Manor later this month, i also said to be in the frame. Other drivers who might appeal to the Enstone team could include Jenson Button and Felipe Massa, especially if experience is going to be a key factor.