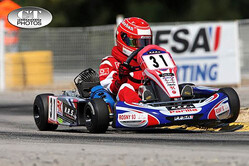 Esteban Ocon reveals that he will race with the number 31 when he takes his place on the Belgian GP grid later this month.

From 2014, when the new formula was introduced, all F1 drivers were allowed to choose a race number that they would use for the remainder of their world championship career.

Ocon, who replaces Rio Haryanto at Manor after the Indonesian driver's backing ran out, has taken to social media to announce that he will race with the number 31 on his car when he takes to the track at Spa-Francorchamps in just under two weeks.

The number 31 adorned the kart with which he won his first national title, the 2007 French Minime Championship.

"It's now official," he tweeted, "I will be having the "31" as my race number, I won my first national championship with this one!"

Curiously, in his numerous FP1 outings with Renault he used the number 45.