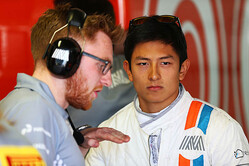 Amidst reports that Esteban Ocon will drive for Manor from Spa-Francorchamps later this month, Rio Haryanto has been offered a reserve role with the team.

"We won't ask if you're enjoying the break from racing. But we do have some news that we'd like to share with you…" tweeted the team this morning.

"In a bid to keep Rio Haryanto's F1 dream alive, we've offered him the role of reserve driver for the remaining rounds of 2016. We continue to be very supportive of Rio's ambitions.

"We will shortly be announcing a new racing teammate for Pascal Wehrlein," the team confirmed.

It was already widely believed that the German Grand Prix was Haryanto's last appearance for Manor, which gave him the drive even though his funding only took him through to Hungary.

It's understood that Manor recently wrote to the Indonesian government which has helped fund his seat, along with state-owned oil company Pertamina.

"We understand Manor's concern but we hope Rio will not be replaced by another driver just because of funding issues," sports ministry spokesman, Gatot Dewa Broto, somewhat naively told AFP.

"We don't really see that happening," he admitted, when asked if the necessary funding might be found, "we can't promise anything".

Meanwhile, there are claims that Mercedes protege Esteban Ocon, currently contesting the DTM Championship with the German marque, and who is test and reserve driver with Renault having made a number of test and FP1 appearances this year, is to replace Haryanto from Spa.

The 19-year-old French driver, who won back-to-back titles in European F3 and GP3 made no secret of his desire to get into F1 when talking to reporters at Hockenheim, scene of his most recent FP1 appearance for Renault.

"Rio has been a much-valued member of our team since January," said Dave Ryan, confirming the fact that Haryanto has lost his race seat, "when we signed a contract with him for this season. Some time ago, his management indicated that they were experiencing difficulties honouring the obligations of that contract beyond the Hungarian Grand Prix. Rio's team have worked tirelessly to try to resolve that situation with his Indonesian backers and we have supported those efforts as much as possible, including allowing Rio to race in Germany. Unfortunately we reached a point where, in the best interests of the team, we were forced to explore other options for the remainder of the season.

"We are very pleased to continue our support for Rio's Formula 1 ambitions, by offering him a Reserve Driver role for the rest of the current season. We very much hope that he will accept that offer."