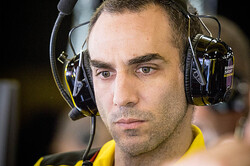 Halfway through a debut season which has proved every bit as challenging as expected, Renault has admitted that it cannot afford to stick to its original 5-year programme and has therefore decided to move it forward while increasing the amount of funding provided.

"We had put together a five-year plan, with an investment package, managing director Cyril Abiteboul told Autosport, "but a couple of weeks ago we had approval to increase that package and bring it forward.

"What we want is to make a difference as quickly as possible," he admitted, "and for that there is no better way than to accelerate what we need to do over the five-year plan."

Although the first half-season has been largely disappointing, which was to be expected considering the state Lotus was already in and the late decision to purchase the team (again), Abiteboul insists he is pleased with long-term progress.

"On the engine side we are completely to plan and the fact we have good reliability this season is fantastic as it allows us to really focus on performance for the future," he said. "The 2017 engine will very soon be on the dyno, and there is really good stuff coming. It's really ambitious, but I'm super happy with the structure we have and the ambition on the engine side.

"On the chassis, there is a big change in the aero regulations, but again we have set ourselves an aggressive target in terms of aero development. Each time we are putting the 2017 car into the windtunnel there are big steps, a big, big chunk of downforce, which will ultimately bring lap time, so it's good."

Referring to recent reports that Lotus lost £57m last year prior to Renault's acquisition, he said: "It was something that was very well known, Renault knew that was part of the equation. We were completely aware of what we were financially exposed to, so it was absolutely no surprise.