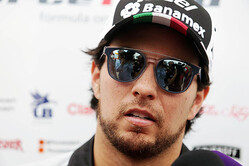 Sergio Perez' sponsors will have the final word on where the Mexican driver goes in 2017 and beyond.

When Vijay Mallya confirmed at Silverstone that Perez would be driving for his team in 2017, not only did it seem a sensible move for the Mexican but for the team also which looks as though it could finish a highly impressive fourth in the year's standings thereby surpassing last year's historic achievement in finishing fifth.

However, Perez was quick to throw a spanner in the works insisting that while Mallya was not lying or jumping the gun, the Mexican intends deciding his own future and would use the summer break to do some serious thinking.

Indeed speaking in Hungary, Perez admitted that his summer break would be spent discussing his future with his sponsors.

"I'm a very lucky driver to have many sponsors behind me, so I'm not alone," he told reporters. "I don't decide my future on my own.

"What Vijay says is correct you know," he added intriguingly. "But as I say, I depend a lot on my sponsors as well to decide together what to do."

Deputy team principal Bob Fernley while confirming that a contract is in place, has now admitted that should the Mexican and his sponsors opt to head elsewhere, Force India would have little say in the matter - which no doubt means an escape clause - and that the team does not currently have an alternative plan (driver) in place.

"It's a case of seeing how the promotional side goes," he told Autosport. "We'd dearly love to keep everyone on board, but it's their decisions at the end of the day, not ours.

"Vijay's main objective is to keep the driver pairing together, and that's what we're after," he admitted. "But at the end of the day everybody has to make their own minds up. We can only influence the drivers, we can't influence the commercial side."

Admitting that there is no 'Plan B' on the table should Perez head off, with Renault and Williams both said to be eyeing his talent and financial backing, Fernley said: "I don't think you can play that game, you have to play it straight. There's a contract in place, and unless something happens with that I don't think you can dangle a carrot to another driver. It's not fair.

"We've got plan A, and plan A is what it is," he added. "If that fails only then will we have a plan B. You know another driver will have his future in place, and if we know that is the case then we wouldn't want to mislead them in any way."

Asked if the team would prefer to learn Perez' plans sooner rather than later, Fernley said: "It will look after itself. I'm not unduly worried."