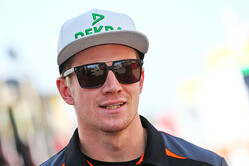 Nico Hulkenberg: "Seventh was probably the best result available to us today, so it feels good to get the maximum from our race and score some important points. The team did a great job with the strategy because we went into the race believing a two-stopper was possible, but then made an early decision to switch to three stops. It was definitely the right way to go and allowed me to take seventh place in the final few laps. The tyre degradation was very high so most of the race was about managing the tyres. It was also quite a lonely and straightforward race because my main fight was against Bottas and we were running different strategies. So it's a happy Nico and a happy team. We can look forward to the summer break and aim to carry this momentum forward in the second part of the season."

Sergio Perez: "It's safe to say today was the worst start in my whole career. I had a lot of wheelspin at the start and dropped back to P16 - so it was a long fight back through the pack. The team had to think on their feet and tweak the strategy to get me back into a competitive position. Degradation was quite high, especially when following other cars, and I spent a lot of time in the middle of the race fighting with Fernando [Alonso]. In the last few laps I was running out of tyres, but I knew Fernando was in a similar situation, so when I saw an opportunity I knew I had to take it. I honestly didn't think we would score points after turn one, but we did it. We go on holiday now, proud of the incredible work we have done as a team in the first half of the season. I am confident we have a lot of good days ahead of us in the final nine races, but for now it's important to get some rest."

Robert Fernley, Deputy Team Principal: "It's satisfying to move five points closer to fourth place in the championship and end the first half of the season with a double points finish. When you look at how the race unfolded, there wasn't much more available to us and the team did an excellent strategic job to help Nico come out on top in the battle against Bottas. Sergio's race became a recovery drive following a very poor getaway and, all things considered, the team did a good job to pick up the final point. The stage is now set for a very close battle in the second part of the season, but we feel we can grow even stronger in the races to come following the break."