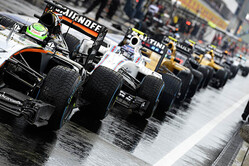 Following today's chaotic, extended session which was delayed by the weather and a number of red flags, the stewards were kept busy as they investigated a number of incidents likely to change the face of tomorrow's grid.

Whilst Nico Rosberg was exonerated after it was proven that he slowed significantly for the waved yellow flags when approaching the scene of Fernando Alonso's spin, there remained doubt over the grid positions of both Red Bull drivers, both Force India drivers and Valtteri Bottas.

All five were under investigation because they had not posted a time within 107% of the fastest time posted in Q1, Rosberg's 1:33.302.

In accordance with Article 35.1 of the Sporting Regulations, the stewards subsequently granted permission for all five to start the race, as each had set satisfactory times in practice.

The stewards also decided, that due to the exceptional circumstances experienced during qualifying, Article 35.2 a) iii should take precedence over Article 35.1 of the FIA Formula One Sporting Regulations, which means that each driver will start the race from the grid position they subsequently qualified.

Furthermore, under Article 17.2 of the Sporting Regulations, teams cannot appeal the decision taken by stewards relating to Article 35.1, consequently the matter is closed.

The regulations state that: "During Q1, any driver whose best qualifying lap exceeds 107 percent of the fastest time set during that session, or who fails to set a time, will not be allowed to take part in the race.

"Under exceptional circumstances however, which may include setting a suitable lap time in a free practice session, the stewards may permit the car to start the race.

"Any driver accepted in this manner will be placed at the back of the starting grid after any other penalties have been applied.

"Should there be more than one driver accepted in this manner they will be arranged on the grid in the order they were classified in P3."

Having qualified third (Ricciardo), fourth (Verstappen), ninth (Hulkenberg), tenth (Bottas) and thirteenth (Perez), had the five been demoted to the back the grid would have taken on a whole new look.