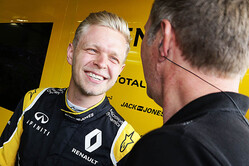 Renault Sport Formula One Team didn't enjoy the German Grand Prix that it wanted today at the Hockenheimring. Starting 14th on the grid, Jolyon Palmer made a decent start, however flat-spotted his tyres then made contact with a rival on the first lap. This necessitated an early pit stop, and a tough race pushing hard from behind ensued. Kevin Magnussen worked up the order early on, although better-than-expected performance from three-stopping rivals meant his hard work was undone in the latter stages of the 67 lap race. Kevin finished in sixteenth, Jolyon in nineteenth.

Kevin Magnussen: "We decided on a two-stop strategy before the race as all the data pointed to it being the correct thing to do, however we saw that the three-stop strategy of our rivals worked better today. This wasn't immediately obvious and we were too committed to the two-stop so it's a lesson learnt. We were too slow on the soft compound on the final stint and our degradation on the supersoft was greater than expected which undid our opportunities of finishing higher today."

Jolyon Palmer: "Everything was really positive coming into this event, and I had a good start; I think I was up to tenth, so it's a disappointing result today. I had a big lock up in turn two and massively flat-spotted my tyres. I could barely see where I was going because of the vibrations and I tipped a Williams whilst trying to hold on from one of the McLarens. This damaged my front wing which we changed at the second pit stop. After that there wasn't much I could do. It's a shame but we can take the positives, put the rest behind us and focus on the second half of the season."

Fred Vasseur, Team Principal: "Despite not getting the result we wanted today there are a lot of positives to take from this weekend. We reached Q2 in qualifying with Jolyon and we showed that we are able to regularly fight with Haas and Toro Rosso during races, which wasn't the case in previous events. Both drivers fought hard today however neither was able to finish strongly. The two stop strategy ultimately didn't work out for Kevin due to timing and better than expected pace from our rivals in the latter part of the race. Jolyon made a super start but unfortunately flat-spotted his tyres so wasn't able to deliver on the potential shown from his qualifying. We'll come back after the break fighting."