Another dawn, another load of clap trap 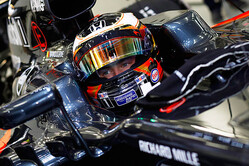 Let's face it, if Stoffel Vandoorne didn't exist, someone would have to invent him.

No sooner has the youngster been linked with Manor, where Rio Haryanto appears to have run out of funding, than the 2015 GP2 champion is being "placed" at Renault, where Jolyon Palmer appears to be running out of time.

Yes folks it is not just the majority of the teams who have given up on 2016 and turned their attention to 2017, sections of the media are doing it also.

Despite the fact that we knew the claim that McLaren is looking to place Vandoorne with Renault for 2017 would get the sort of response Kimi reserves for his backmarkers on Sunday afternoons, we summoned the courage to ask if there was even a smidgen of truth to the story.

The McLaren director concerned, episcopal of surname and bald of brow, sighed long and loud when Pitpass telephoned him and then said, 'As the hapless wretch charged with the unenviable task of issuing statements debunking the nonsense written all too often about McLaren and all who sail in her, I have been unusually busy recently. Suffice it to say that this latest rumour is also a load of equine ordure.'"

So that's a no then.