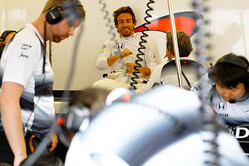 It was mixed fortunes for the McLaren-Honda team at the Hungarian Grand Prix. Fernando Alonso had a trouble-free race, starting in seventh position and maintaining his gap to the competition behind to finish in the same place in which he had started, bringing home six valuable world championship points.

Conversely, Jenson Button suffered bad luck throughout his afternoon. On lap four, a sensor failure caused his brakes to stop functioning properly, and the team was forced to give him the necessary information over the garage-to-car radio so as to resolve the issue. Already in last place despite having started eighth, he then incurred a drive-through penalty for transgressing the new regulations in respect of radio communications. After a valiant drive from the back of the field to try to make up some of the positions he had lost, he retired on lap 60 owing to an oil leak while fighting Felipe Massa for 18th place.

Fernando Alonso: "Well, P7 has been my position all weekend! It's a pity we couldn't improve this afternoon but still I think we were best of the rest today. Mercedes, Red Bull and Ferrari are out of reach at the moment for everyone - they're on another level - so, in the other mini-championship we're racing in, we were quite competitive and I feel we delivered the maximum we could today.

"There wasn't much action in the race though. For us, it was a little bit of a boring afternoon at some points - not the usual Hungaroring show - and the only retirement, unfortunately, was Jenson.

"I'm happy about how the weekend went and hopefully we can keep this up progress. We've been more or less competitive here and at Silverstone, on two very different circuits, so I'm looking forward to next weekend at Hockenheim."

Jenson Button: "We had a brake sensor problem early on, which meant the pedal went to the floor, and it's never nice for a driver to get that feeling. The brakes just weren't there, which was a big safety concern. The team told me to make a switch change on the steering wheel to make sure it wouldn't happen again, and it duly resolved itself, but we got a penalty for the communication. We pitted so that they could give me the information I needed, but I guess we should have pitted earlier than we did. Having said that, it didn't really matter as I was last anyway.

"I completely understand that drivers shouldn't be fed information that helps us drive our cars - we should be able to deal with that job ourselves, and in fact I love that challenge. But when it's a safety concern, I don't think you should get penalised for preventing an accident, as we did today. When you have a power unit that's so complex, a driver can't figure out everything for himself. It's a regulation that shouldn't be in place at this level of a sport which is so good in so many other ways, and I think commonsense should now prevail.

"I also had a mechanical issue which meant I had massive understeer throughout the whole race; and then, in the end, we retired with an oil leak. I don't know if it's salvageable - I hope so - but we're investigating."

Eric Boullier, Racing Director: "Jenson was unfortunate to have a promising weekend brought to an untimely end by an oil leak, which led to the most disappointing initials in racing: DNF.

"He'd driven very well all weekend - in fact he may even have qualified even better than his eventual P8 yesterday if his run hadn't been compromised through no fault of his own - but I guess that's racing.

"As for Fernando, I may be wrong, but I think the consistency he's demonstrated over the past three days may be a record-breaker. It reads as follows: FP1: P7; FP2: P7; FP3: P7; Quali: P7; Race: P7. Not quite seventh heaven, but a solid and encouraging performance that underlines the good progress we're making all the time.

"From here we'll travel to Baden-Württemberg, for the German Grand Prix, the last race of the first half of the season. The Hockenheim circuit may not suit our car / power unit combo quite as well as did the Hungaroring this weekend, but we'll be gunning for points yet again; be in no doubt of that."

Yusuke Hasegawa, Honda R&D Co Ltd Head of F1 Project & Executive Chief Engineer: "It was a positive weekend for the team to be leading the midfield pack. We were consistently the fourth-quickest team, with Fernando finishing 'best of the rest' in P7 in all the sessions, which once again displays our progress as a team, and helps build confidence for the second half of the season.

"On the other hand, Jenson was hampered with a brake system sensor issue, which put him at the back of the field in the early laps of the race. In the end, the team had to retire his car due to an oil leak. At the moment, we don't see any issue with the power unit, but the team will continue to investigate.

"It was another bitter-sweet weekend to see one side of the garage happy and the other disappointed."