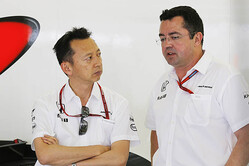 Fernando Alonso: The Hungaroring is a great little circuit, and has quite unique characteristics that not many other tracks share. It's a bit like a street circuit in the way it's configured, even though it's purpose-built, and it requires absolute precision and concentration to get the most out of every lap.

Since you need good balance and downforce, the best way to get a good lap time is to really attack the corners - a bit like in karting - so from that point of view it's a really fun circuit to drive. Although it's not a traditional 'power' circuit like many others, it doesn't feel like a slow circuit either; I hope we can find a good set-up early on in the weekend so we can really make the most of our car and hopefully have some fun.

Silverstone was definitely a challenge for us, but we knew that from the beginning and we still took a lot of positives away from the weekend. Reliability-wise, we're getting stronger, and the test just after the grand prix was definitely a little boost for the whole team. We completed a full programme, got a lot of mileage done, and learned a lot which will help with our development, so hopefully we can put some of this knowledge to good use in Hungary.

"There's no such thing as perfect in this sport, but the important thing will be to execute a trouble-free weekend in all areas. If we manage to get the best out of every session, and have some clean, drama-free running, hopefully we can find some good pace in the car and maximise the potential of what we have underneath us - and score some valuable points."

Jenson Button: This circuit is quite different from the last few we've been to, so I'm looking forward to heading back to Hungary next weekend. It's less dependent on power, and much more dependent on traction, cornering speeds and agility, and it's a really enjoyable challenge. You get a great feeling when you hook up a good lap there.

"The focus is much more on aero, so we'll run pretty high downforce and try to make the most of our car's good traction under braking. Hopefully it'll mean we can keep up with the chasing pack and maybe even make up a bit of ground, too. Although we struggled with our pace in Silverstone, the Hungaroring is a different kettle of fish, so I'm keen to see how we perform there."

Both Fernando and I won our first grand prix in Hungary, and it's always a special feeling going back. It's been 10 years since that first victory - although it doesn't feel that long - so the Hungaroring is a place that holds great memories. Budapest is a really cool city and we stay more centrally than at many other grands prix, so we get to see quite a bit of the surrounding area, and it makes for a great atmosphere and a real buzz about the place.

"In the past couple of years Hungary has been fairly good to us and provided a bit of a boost before the summer break after a relentless few weeks of back-to-back racing, so I'm hoping for more of the same this time around. It suits our car more than some of the other circuits, but of course there are no guarantees, so we'll be putting in the hard work on Friday to make sure we have the best possible set-up for the demands of this quirky track."

Eric Boullier, McLaren-Honda Racing Director: "We head to the Hungaroring off the back of a positive couple of days testing at Silverstone. The grand prix weekend was certainly a challenge, but knowing the characteristics of the circuit as we do, we were prepared for a difficult race, although it's still disappointing not to have finished in the points.

"The test, however, was encouraging, and we definitely maximised the track time to collate some valuable data which our engineers in the UK and Japan are putting to good use on the development of the MP4-31. Not all will apply directly to the race in Hungary, of course, but we certainly hope that we can align the strengths of our package with the unique nature of the Hungaroring circuit.

"Over the past few races, we've endured some bad luck, made a few small mistakes, and suffered some reliability niggles. But, if we can enjoy a smooth weekend, I'm hopeful we can fulfil the potential that our package has shown at various points throughout the season so far, on both sides of the garage, and secure a result that, statistically, we know we're capable of on this type of circuit."

Yusuke Hasegawa, Honda R&D Co Ltd Head of F1 Project & Executive Chief Engineer: "With an old-school style racing circuit and the shimmering summer sun, the Hungarian Grand Prix is a special place for Honda. I can still remember when Jenson won his first Grand Prix with us in 2006 and the incredible atmosphere within the team and fans.

"Though the Hungaroring is not a power-oriented circuit, it still requires precise energy management throughout every lap of the race. It's also a circuit where overtaking is extremely difficult, so it'll be important for us to get the qualifying lap correct. Our target again is to reach Q3 and be in a good place to score more points, for which we have two skilled drivers that we have complete trust in to drive brilliantly through the gruelling 70-lap race."

DRS zones: Two, on the approaches to Turns One and Two

Key corner: Turn 14, a tricky 180-degree right-hander, which has a bump in the middle. To be fast, a car needs good front-end grip to hold it at the apex, but traction is also important because the longest straight on the lap follows and exit speed is critical

Major changes for 2016: None, bar a few changes to the kerbs

ERS demands: Medium. It's a short lap with lots of acceleration from low speed, but only 14 per cent of the lap is spent braking, and that provides the cars with relatively few opportunities to harvest energy

Brake wear: Medium. There's a significant braking event into Turn One, where the cars pull 5g, but that's the only big braking zone

The Hungaroring was the first circuit in the world to be built specifically for Formula 1. Situated 20km (12 miles) north east of Budapest, the track was constructed in just nine months ahead of the inaugural race in 1986. Only six tracks on this year's F1 calendar have staged more races than the Hungaroring.

What makes it unique: The number of slow corners. Twelve of the 14 corners are taken at less than 200km/h (124mph), which places an emphasis on mechanical grip and has earned the track the nickname of 'Monaco, without the walls'.

Grip levels: Poor. The track is rarely used, which means the surface is very dirty early in the weekend. The racing line cleans up relatively quickly once practice gets underway, but the asphalt remains slippery off-line throughout the weekend.

Run-off: There's ample run-off at Turn One, where the cars exceed 300km/h (186mph) on the approach to the corner, but the barriers are relatively close elsewhere due to the slow speeds. The smallest of mistakes can be punished by contact with the tyre wall.

Watch out for: Turn Four, the fastest corner on the lap. The uphill approach means the drivers can't see the exit and the surface drops away near the apex kerb. Precision is crucial in order to be quick.

Safety Car likelihood: Low. The Safety Car was deployed in 2014, and the virtual Safety Car in '15, but those were anomalies. Statistically, there is only a 10 per cent chance of a Safety Car in the Hungarian Grand Prix

When to press record: Qualifying. The track's tortuous twists make overtaking difficult, which places even greater emphasis on qualifying - although no-one told Nigel Mansell in 1989; he qualified 12th and won the race

Don't put the kettle on: The first pitstops occurred on or around lap 20 last year. But the Supersoft tyre will be the qualifying compound this year and that could force earlier pitstops because it's faster wearing

Tyre choices: Supersoft/Soft/Medium, a combination that was last used at the European Grand Prix in Baku