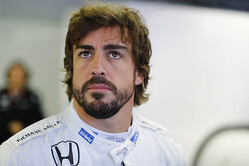 Fernando Alonso: Hockenheim is quite a technical circuit which requires fairly high downforce, and although most of the corners are relatively low-speed, they come after long, power-hungry straights, so the set-up of both the power unit and chassis for both eventualities can be quite tricky. For this kind of circuit, you need a car with which you can push, and I feel we're making improvements in that area.

"For sure it will be different to Hungary - we can't expect to be the number four team there, and our midfield rivals will be stronger, but we'll try to maximise everything we have in our armoury and give it our best shot. The whole team has worked incredibly hard over the first half of the year, so it'll be great to be able to have some luck and bring both cars home without any major issues.

"I'm pleased to be heading back to Hockenheim after we missed a race in Germany in 2015. It's been a good circuit for me in the past - I've had three victories on this circuit, and five in Germany, so there's lots of happy memories. There's usually a good atmosphere there and there's something special about the feeling of it being the last race before the summer break - everyone is upbeat and pushing hard because they want to finish the first half of the season on a high.

"The weather is always a factor in Germany - this time of year tends to be hot, but you can never be 100 per cent sure, so even a little bit of rain could mix things up a bit, which might help us. We're know it'll be a tough race, but after Hungary - even though the characteristics are very different - I'm pleased with the progress we're making and I'm definitely up for the challenge."

Jenson Button: "Although Hockenheim has had two different configurations over the years, there's a lot of history there and the fans love their racing. Our car is strong under heavy braking, but despite the long, sweeping corners and fast straights, this isn't as much of a necessity there as in Hungary. We're expecting it to be a tricky weekend as the best-placed cars are the ones with the highest straight-line speeds, but we'll see what we can do. The MP4-31 is well balanced and has good traction out of the corners, so we might be able to make up some time around a lap.

"There are a couple of decent overtaking opportunities there, so you don't just need to rely on DRS and a good slipstream on the straights, and it's an enjoyable challenge. The asphalt is smooth which will hopefully rubber in nicely over the course of the weekend, as you need good grip to have any chance of making up ground. I remember the craziness of the old configuration - huge straights and fiddly chicanes, which made set-up a tricky compromise - and this layout is very different, but you can see they've designed it to promote close racing."

"Last Sunday in Hungary was a big disappointment on my side of the garage - we showed a lot of promise throughout the weekend leading up to the race, but on Sunday it seemed that everything that could go wrong, did. Still, that's part of racing and Fernando has had his share of bad luck over the past few races, so it was good he was able to get some points and maintain a good pace.

"I hope we can regain our form in Germany and enjoy a positive race for both cars before the summer break. After last weekend, the main thing we need to focus on is reliability. If we have that, it at least puts us in a position to see where we are on track and be in the hunt for points. Hopefully the weekend will throw up a surprise or two, and we can both have a smooth weekend."

Eric Boullier, Racing Director: "After a long and gruelling first half of the season, culminating in six races in seven weeks, the whole team is preparing for the final push at the German Grand Prix before a well-deserved summer break. Despite the drama and poor luck Jenson suffered on Sunday at the Hungaroring, our pace as demonstrated by Fernando was encouraging. Although not as a high a finishing position as last year, we showed form and consistency throughout the weekend, and in a race of very low attrition except Jenson's unfortunate retirement, we were able to maintain our position on merit and keep our nearest midfield rivals firmly behind us.

"Now, we head to Hockenheim, which certainly offers a very different challenge to test our package. We are under no illusions that we'll enjoy the same levels of pace that Fernando could exploit in Hungary, but nevertheless we'll strive to set-up our package to enable our strengths to shine and outweigh the more difficult elements. With the support of the 50,000 plus fans in the stadium section alone, and our usual grit and hard work, we'll do everything we can to finish the twelfth race of this 21-race season on a positive note.

"I'd also like to thank all our team members in Woking, Milton Keynes and Sakura for their admirable stamina, unwavering determination and unflappable perseverance throughout the first half the season. We'll be giving it our all over the weekend to maximise our chances and give both cars the best opportunity to push for points. Both our drivers have a lot of experience fighting on this circuit, too - and have both enjoyed victory there - so they'll certainly be taking the battle to the track this weekend in the hope of sharing some of the spoils on offer at this most historic of venues."

Yusuke Hasegawa, Honda R&D Co Ltd Head of F1 Project & Executive Chief Engineer: "Though Hockenheimring is another power-oriented circuit, McLaren-Honda has continued to show progress and strength through every race of the European leg, and we believe that we can once again perform to the best of our abilities at the German GP this weekend.

"As a team, this will be our first race at this track so it will be a busy weekend to fine-tune and set up both the power unit and the chassis. It will also be important for us to fix any reliability issues that we have had over the past race weekends, and face the last race before the F1 summer shutdown with a positive outlook.

"Hopefully, we can repeat the good points finish that we had in Hungaroring with Fernando's car and score more championship points before the second half of the season."

DRS zones: Two, on the approaches to Turns Two and Six

Key corner: Turn Two, where entry and exit are equally important. The cars approach this second-gear corner at 325km/h (202mph) and then accelerate up to 350km/h (217mph) along the following straight, so braking on entry and getting the power down cleanly on exit are vital

Major changes for 2016: None, except for a few changes to kerbing and Astroturf

ERS demands: Medium. The sharp bursts of acceleration from low speed are demanding on ERS, but there are several opportunities around the lap to harvest energy under braking - into Turns Two and Six in particular

Brake wear: Medium. There are some challenging braking zones, but the long straights provide opportunities to cool the brakes

Safety Car likelihood: Low. In nine races at the re-profiled Hockenheim there have been just three Safety Car periods, most recently in 2014 following a collision on lap one

When to press record: Lap three, when, in dry conditions, the Drag Reduction System is enabled for the first time. The predominance of short-radius corners allows the cars to follow each other closely and when you factor in DRS, the racing can get very exciting

Don't put the kettle on: Nico Rosberg won the last race at Hockenheim, in 2014, on a two-stop strategy. But only three drivers inside the top 10 two-stopped; the rest three-stopped due to higher than expected rates of tyre degradation. With the Supersoft tyre in use this weekend, expect to see the first stops on or around lap 15

Weather conditions: 29 degrees, but there are expected to be showers in the area

Hockenheim was built in 1929 as a test track for Mercedes Benz. It first hosted the German Grand Prix in 1970, although it only became the permanent home of the race in '77, following Niki Lauda's accident at the Nürburgring Nordschleife the previous year.

What makes it unique: The long straights, although the high-speed character of the circuit changed irreversibly in 2002, when it was shortened and re-profiled by Hermann Tilke. It's now more of a classic stadium circuit, requiring less extreme car set-up parameters.

Grip levels: Medium. Most of the asphalt dates back to 2002, when the track was re-profiled. It's a very smooth surface, similar in micro-roughness to the Red Bull Ring, but a number of fast corners means Pirelli have elected not to bring their Ultrasoft compound to the race.

Run-off: Part of Hermann Tilke's remit when re-designing the circuit in 2002 was to increase the run-off area at the fastest points on the lap, such as Turns One, Two and Six.

Watch out for: Turn 12, a sixth gear right-hander taken at 210km/h (130mph). The asphalt falls away at the exit, inviting the cars to run wide if their line isn't perfect. Added to the driving challenge is the electric atmosphere of Hockenheim's Motodrom, with its huge grandstands, at this point on the track.