Buemi in action for Pirelli at Mugello

Pirelli's 2017 tyre testing continues at Mugello where Sebastien Buemi was in action for Red Bull yesterday.

The Swiss, who has not driven an F1 car for almost two years, completed 82 laps of the Tuscan circuit in an RB11 modified to stimulate 2017 performance levels and also to accommodate the new wider tyres.

The test, which follows two days of wet weather testing at Fiorano, which saw Sebastian Vettel and Esteban Gutierrez in action in an SF15-T, is the first for the proposed slick tyres for 2017. 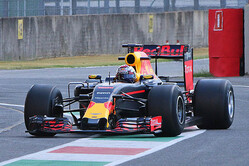 As part of the agreement, Red Bull, like Ferrari, was not given any information on what compounds they were testing at any given time and are obliged to share all data gathered with rival teams.

The test concludes today as the summer break kicks in, and resumes next month when Ferrari and Mercedes are in action at Barcelona and Paul Ricard, respectively.