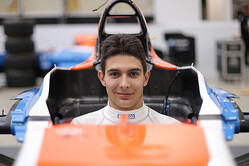 Manor has confirmed that Esteban Ocon will replace Rio Haryanto from the forthcoming Belgian Grand Prix.

Confirmation of the Frenchman's appointment came shortly after the Banbury based outfit revealed that Rio Haryanto had been offered the reserve driver role for the remainder of the season, the youngster's funding having run out before the recent German Grand Prix.

Ocon, who won the French KF3 (karting) title and finished runner-up in the WSK Euro Series, moved up to single-seaters in 2012, contesting the Eurocup Formula Renault 2.0 series.

A largely disappointing season saw him finish fourteenth overall, though this included a podium at his home round at Le Castellet.

The youngster also took part in a number of Formula Renault 2.0 Alps events with Koiranen, the Frenchman finishing seventh overall with two podiums, both of which came at the Red Bull Ring. The following year he remained in Formula Renault, contesting the Eurocup and NEC with the ART Junior Team. Taking three podiums, including his maiden win (Le Castellet) he finished the Eurocup third overall.

Having contested the Macau Grand Prix with Prema Powerteam in 2013, he remained with the Italian outfit in 2014, contesting the European Formula 3 Championship. 21 podium finishes, including 9 wins, saw the youngster claim the title at the first attempt, winning the crown with a race to spare.

In addition to three rounds of the Formula Renault 3.5 Series, 2014 also saw Ocon make his F1 debut, the youngster driving the Lotus in the post-season Abu Dhabi test.

Meanwhile, even before securing the F3 title, Ocon had been signed to the Mercedes junior team.

2015 was another strong season for the youngster, taking the GP3 title at the first attempt, with ART Grand Prix, and F1 tests at Barcelona and the Red Bull Ring with Force India.

In February, Ocon was revealed as Renault's reserve driver, and a week later he was confirmed as a member of Mercedes DTM squad. Though having a difficult time in DTM he has enjoyed a number of successful FP1 sessions with Renault and last month made his F1 debut with Mercedes during the Silverstone test, driving the WO7 on both days.

Widely tipped as the successor to Alain Prost, Ocon will form a strong (Mercedes) partnership at Manor.

"We are very pleased to welcome Esteban to Manor Racing for the remainder of the season," said Dave Ryan. "He is clearly one of the rising stars of F1, shining in his Reserve Driver role with Renault, while also competing in the DTM with Mercedes-AMG this year.

"Our team has made significant strides in 2016, including finishing in the points for the first time in Austria last month. We need to maintain our pace of development in order to achieve our ambitions, not only for this season but also for the longer-term, so the calibre of a replacement is key. We're confident that when Esteban makes his Grand Prix debut in Spa, we will have a very potent line-up with which to take the fight to our immediate competitors for the rest of the season."

"I'm thrilled that I'll be making my Grand Prix debut with Manor Racing later this month," added Ocon, "and at Spa, of all circuits, which is the next best thing to my home race. I'm ready for this exciting step up, thanks to the experience I've gained as a Formula 1 Reserve Driver this season. I'd like to thank Renault Sport F1 Team and Mercedes-Benz for working together to make this happen, and to Manor Racing for the opportunity, which I'm going to grab with both hands. I've visited the Manor Technical Centre already, for my seat fit and to meet with the wider team, so we'll be ready to hit the ground running after the summer break. They've done a great job this season and I'm excited that I've been tasked with helping them to build on that progress. I can't wait to get started!"

"Esteban joining Manor Racing for the last nine races of the season demonstrates the excellent relationship the two teams," said Cyril Abiteboul, Managing Director, Renault Sport F1 Team, "Renault Sport Formula One Team and Mercedes-Benz, have maintained for several years. It is an outstanding opportunity for Esteban to gather mileage and race experience in a young, stable and very professional team. Esteban will be up against a highly rated and quick teammate, which will enable us to evaluate him in a representative environment. I hope this experience will be of great benefit for him and for Renault in the near future."

"We are very pleased that this opportunity has opened up for Esteban," added Toto Wolff, Head of Mercedes-Benz Motorsport, "that Manor has again had the confidence to give a chance to a promising young talent and that the good collaboration between Mercedes-Benz and Renault has allowed this to come together. We have seen this year that, in the right circumstances, the Manor Racing car is capable of points. Manor is just the right environment for a young driver to get his first experience of F1: a professional, small team that is on a positive upward trend and where the driver can make a real difference. Esteban did an exceptional job in the works Mercedes at the Silverstone test and we are excited to see him take his first steps in an F1 race environment."