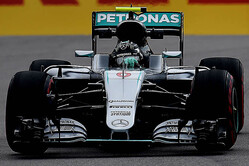 Having had one of the worst starts ever, Nico Rosberg's day was about to get a whole lot worse.

Having totally wasted his hard-earned pole position by slipping to fourth, almost sixth in the opening stages of the first lap, and looking in danger of losing even more when he inexplicably took to the grass as he fought off the Ferraris, the German was subsequently involved in an incident involving Max Verstappen.

In a move which had similarities to the incident in Austria involving teammate Lewis Hamilton, the German, who had the inside line as he battled with the Dutch teenager for third at the hairpin, left his braking very, very late and as he finally turned left the Red Bull driver with little option but to go wide.

As Verstappen claimed the Mercedes driver had forced him off the track, the stewards, after a short investigation agreed and handed Rosberg a 5-second time penalty.

Told of the penalty, Rosberg told his team: "Can you explain to them that I was at full lock on the steering wheel".

To compound his nightmare, when serving the penalty, a timing error actually meant the German was stationary for 8s before work began on his car.

Speaking after the race, Rosberg was defiant, insisting that he had not deliberately forced Verstappen off the road.

"I was very surprised that I got penalised, I didn't expect that at all," he told reporters. "It's just one more of those things when your day goes completely wrong.

"All these things come together, but I don't think it made a difference in the end," he continued. "I couldn't have challenged the Red Bulls I think after that penalty.

"Without the penalty I was in front of them, so the penalty cost me dearly," he added, referring to the Red Bull duo who finished second (Daniel Ricciardo) and third, sharing a podium for the first time.

"They were running on a good pace," he admitted. "We are keeping an eye on them."