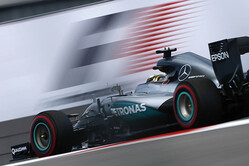 Remember when you were a kid?

Remember how the summer holidays seemed to last forever, and then, about two weeks before they were due to end the signs began appearing in shop windows.

You know the signs we mean, they read; "Back to School".

And suddenly in one fell swoop you were no longer thinking of fun things rather those seemingly endless days in the classroom... history, geography... chemistry.

Indeed, all that was left was to count off the days to Christmas.

Hard to believe but a couple of weeks back I saw my first "Back to School" sign, and this was before the holidays had even begun.

Today's race has a summer holiday feel about it, mainly because after today's event the sport takes an enforced break which in total last three weeks, but teams are only prevented from working for two of those weeks.

This being the German Grand Prix, at Mercedes it has a 'parents day' feel about it, for all the Stuttgart company's top brass will be in attendance, along with friends, family and other important guests.

Consequently, the German manufacturer will be hoping its two star drivers are on their best behaviour today and that - talking of schools - they will not descent to a St Trinian's style punch-up, after all, Hockenheim has had its fair share of punch-ups.

Toto Wolff insists that Lewis and Nico have not been warned to watch their behaviour and are to treat this like any other race.

Which reminds us of an email we received from our friend Jeremy earlier this week. "I'm off to Germany tomorrow," he wrote. "The other two races that I have been to are Spain and Austria, so let's see if the Mercedes boys hit each other and make it three in a row!"

Sadly, with his school fees allegedly in arrears we may not be seeing Rio Haryanto after the break, and enforced shutdown or no enforced shutdown work will be going on behind the scenes as teams and driver managers try to secure the Manor seat for their man.

And what of Daniil Kvyat, might we see Dr Marko dump the hapless Russian over the break, after all the Austrian has history.

For a sport that boasts of its passion and respect for its history - indeed, bonus payment are based on it - at times it can be somewhat callous.

Hard to believe the clearly broken man we saw yesterday afternoon is the same driver who stood up to Sebastian Vettel in China, saying: "That's racing" is response to the Ferrari driver's claim that he hit him.

Barring the Mercedes duo doing something very, very silly, this should be a walk in the park - OK, Ring - for the German team, and with Nico having looked strong all weekend he has to go into this afternoon as favourite.

Oh but how Lewis would love to beat him on his home circuit, to soak up the adulation, and Champagne, in the German's own backyard.

Whatever the team and its drivers might say about the relationship between the pair, last week's incident in Hungary - when Lewis effectively snitched on Nico to Headmaster Whiting - said it all, even Paddy Lowe describing it as "regretful".

Behind the Mercedes we have the makings of a classic afternoon, providing enthusiasm can be kept in check and that Charlie Whiting doesn't come up with any further rule changes during the race.

The Red Bulls and Ferraris are pretty evenly matched, though Ricciardo's opening stint could be affected by the fact that he did two extra laps in Q2 yesterday. Even so, we look forward to a resumption of the duels witnessed in Hungary, especially in terms of the Iceman and the young pretender.

Next up are Force India and Williams, though our money has to be on the Silverstone-based outfit, both in terms of tyre strategy and the fact that the Grove outfit has not impressed for some time.

Behind these two its becomes a little muddled as the various teams form appears to waver from session to session. Looking strong at the start of the weekend, McLaren faltered yesterday, whilst Haas is all over the place - literally, just ask Romain. Toro Rosso will probably perform better in the race than qualifying while Renault remains in that netherworld between the rear of the midfield and Manor/Sauber.

While the weather gods could play a part, it looks unlikely, therefore, if we are to get a decent race, and not a repeat of last week's bore-fest, we need to rely on the Mercedes duo and the resumption of hostilities between Kimi and Max.

Talking of Kimi, for someone many were writing off not all that long ago, the Iceman is currently enjoying an Indian Summer.

Great to see a decent attendance today, the empty stands on Friday not what this circuit, country or stars of the show, deserve.

In terms of tyres we have the medium, soft and supersoft, with Pirelli recommending maximum stints of 29 laps on the soft and 22 laps on the supersoft.

Talking of Kimi - and we usually are - following this week's meeting of the Strategy Group the radio rules have been relaxed so we should hear a lot more chatter today. And no doubt more expletives.

As for the rules on track limits they appear to be making it up as they go along, though T1 is the one to watch. According to the most recent directive from Charlie Whiting: "The usable track limit at turn 1 should be the outer edge of the kerb, i.e. the edge furthest from the track. The performance of any driver going beyond this point, with any part of the car, will be examined in order to establish whether or not an advantage was gained by exceeding this limit."