Sainz edges out Hamilton and Norris in FP2 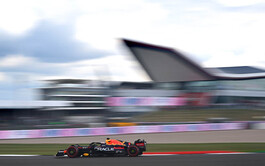 Due to the inclement weather earlier, only ten drivers posted times, not so much because of the intensity of the downpour but rather the need to conserve tyres in case of further rain over the weekend.

Ferrari has an updated engine cover, sidepod undercut revision, rear view mirrors, outboard stay redesign. "This update is part of the standard development cycle," explains the Italian team. "This is an optimisation of the current car concept and results in overall aerodynamic efficiency increase as well as engine cooling capacity range refinement."

McLaren has new rear wing and cooling louvres, while Alpine has a new floor body, engine cover and front suspension.

Merely a new nose for Alfa Romeo and front wing endplate for Haas, while AlphaTauri has no updates whatsoever.

The lights go green and understandably there is a mad rush to action. Sainz leads the way, followed by Vettel, Norris, Bottas, Tsunoda, Gasly, Russell and a whole load of others, including Hamilton. All three compounds are in use as in no time at all, all 20 drivers are on track.

Sainz gets things underway with a 35.345, but this is subsequently beaten by Bottas, Tsunoda, Ocon, Alonso and finally Verstappen, who crosses the line at 31.438.

"The sound is still here, complains Verstappen, "it's like something is touching." "It's very windy out there," he adds.

"Completely blocked by Norris, again," says Russell. The Briton had previously complained of being blocked by an AlphaTauri.

Perez is fourth, ahead of Hamilton, Alonso, Ocon, Bottas, Albon and Norris.

Acquiring data is the name of the game as the drivers rack up the lap count.

While the Mercedes isn't showing any signs of porpoising, Hamilton remains 0.954s off the pace.

At which point Hamilton warns... "I'm bouncing a lot at high speed."

Sporting an over generous amount of red flo-vis on its right-side, Albon's Williams resembles a Ferrari.

Russell is the first of the big guns to switch to the softs, the Briton improving from 17th to 7th with a 30.583, though still down on Bottas.

Magnussen goes seventh (30.532) on the softs, but Norris is on a hot lap having gone quickest in the opening sector. PBs in the final sectors see the Briton stop the clock at 29.118 to go top by 0.344s.

Most are now running the softs, though the Bulls have yet to try them, as have Hamilton or Ricciardo.

Sainz posts a 29.014 and despite a question mark over his going wide at Copse, the time is not deleted.

Sainz complains that he could go quicker if not for the bouncing.

The red flo-vis has been removed from Albon's car, though the front wing is sporting the green version. Indeed, a number of cars are still wearing the dayglow 'paint'.

"I don't know what's happening, I have no grip," warns Gasly.

Alonso clearly taking a pounding as his Alpine bounces through Copse.

Re[play shows the rear jack breaking while Norris' car was being lifted, causing the McLaren to drop heavily.

"Sebastian was held in the garage after some minor damage was detected on the floor of his AMR22," reveals Aston Martin. The German, who is adamant that he hasn't been off track, is currently 15th.

Currently ninth, Ricciardo is about 0.8s down on his McLaren teammate.

As the clock ticks down, attention turns to longer runs as the drivers switch to hards and mediums.

"You're matching the Ferraris now," Russell is told, while Ocon is out after suffering a cracked sidepod.

"Something might have fallen off my car, something off the floor, I'm sure." Indeed, something has fallen from the W13 as the TV cameras confirm.