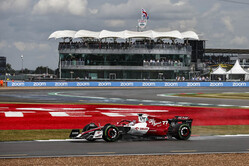 Ahead of today's opening practice session, the air temperature is 17.3 degrees C, while the track temperature is 26.8 degrees. Though bright at the moment there are dark clouds moving in, indeed there is a 100% chance of rain... come on, this is England.

As ever the team have brought updates, some more than others, Williams leading the way.

Ferrari has an updated engine cover, sidepod undercut revision, rear view mirrors, outboard stay redesign. "This update is part of the standard development cycle," explains the Italian team. "This is an optimisation of the current car concept and results in overall aerodynamic efficiency increase as well as engine cooling capacity range refinement."

McLaren has new rear wing and cooling louvres, while Alpine has a new floor body, engine cover and front suspension

Merely a new nose for Alfa Romeo and front wing endplate for Haas, while AlphaTauri has no updates.

In the moments before the lights go green, the first spots of rain begin to fall, up go the umbrella and on go the pak-a-macs.

Russell is first out, followed by his Mercedes teammate, both sporting Inters. Sainz is next out, while Leclerc completes the Noah's Ark vibe.

Russell is warned that it's about to get wetter, as Sainz reports conditions as "greasy", claiming that Inters are only needed in Turns 6 and 7.

While the other three pit at the end of their install lap, Leclerc continues around. He subsequently posts a 44.769.

Tsunoda is the second driver to post a time, the Japanese stopping the clock at 51.373, as Stroll, Ricciardo, Vettel and Gasly head out,

A 49.000 sees Sainz go second as most wait for conditions to improve, which shouldn't be too long now.

While there are only 5 times on the board, after 20 minutes all bar Schumacher and Bottas have been out for at least one lap.

As Magnussen goes third (48.161), Sainz reports that it is getting dry and he intends to pit.

A 46.171 sees Zhou go third as he and teammate Bottas enjoy a clear track. The Finn subsequently posts a 46.056 to leapfrog his teammate.

With 35:00 remaining, Hamilton heads out again, still on Inters.

Sainz improves to 42.967, as Inters remain the order of the day.

With 20 minutes remaining, despite the fact that there is no rain there are no cars on track.

"If there is more rain coming, there's no sense in driving," says Schumacher as another dark cloud moves in.

Hamilton walks to the pit-wall to wave to the crowd.

15 minutes remaining, and while it has now started raining again, the engine in the back pf Hamilton's Mercedes is fired-up. A couple of minutes later he heads out, still on the green-banded rubber.

The seven-time champion crosses the line at 49.476 to go seventh.

The Briton is told to look for wet patches - the rain having stopped - and told he will pit and stop for slicks.

As Hamilton heads into the pitlane, and warned of increased winds at Stowe, Bottas heads out on Inters. Hamilton switches to softs.

Leclerc heads out on Inters and Sainz on hards.

Though quickest in the final sector, Hamilton fails to improve his overall time, while Bottas goes top with a 42.249.

Hamilton improves to fifth with a 44.798, while Stroll goes off at Copse.

The Aston Martin is beached in the gravel trap and as a result the session is red-flagged and will not be re-started.

Nonetheless, in the moments before Stroll went off, Hamilton improves to second with a 42.781.

Just ten times on the board, Bottas is quickest, ahead of Hamilton, Sainz, Leclerc, Schumacher, Zhou, Magnussen, Stroll, Tsunoda and Vettel.