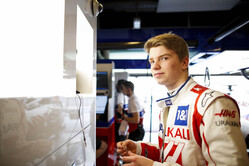 Russia's Robert Schwartzman set the pace on the second and final day of post-season testing, the youngster driving the Haas in the Young Driver Test.

However, the Russian was the only driver taking part in the Young Driver programme today, the other nine drivers on duty all focussing on 18-tyres testing in 'mule' cars whilst Schwartzman was at the wheel of a 2021 contender.

The two days of testing took place in dry conditions with ambient temperatures that ranged from 18 to 32 degrees, and track temperatures varying from 20 to 42 degrees.

Using their 'mule cars', the teams had the chance to try out all five of the 2022 18-inch slick compounds that will be used from the start of next season. The fastest driver over the two days was Lando Norris (McLaren) who set a time of 1:25.809 on the second day.

At the same time as trying out the 2022 tyres, there was also a one-day young driver test with the current 2021 13-inch tyres. Fastest of the young drivers was Nyck De Vries for Mercedes, with a time of 1:23.194s set on Tuesday.

In accordance with the prescriptions, drivers ran with 17.5 psi of tyre pressure at the back and 21.5 psi at the front - which was subsequently reduced to 20.0 psi on the second day.

"We're pleased with how these two days of testing went, and with the behaviour of the new 18-inch tyre in general," said Mario Isola. "Today marked the final chapter in a development story that started back in 2019, leading to a completely new range of tyres and compounds for 2022.

"We saw some graining during the first day on the front tyres that led to a bit of understeer: especially with the softer compounds, which were run most often as they were best suited to this track. After analysing the data from day one, we saw it was possible to reduce the front tyre pressure by 1.5 psi, which improved the situation - particularly for the C3 compound.

"But we need to keep in mind that mule cars were used and that the goal of this test was to allow the teams a chance to gather data to analyse over the winter. We'll only get a true picture at the start of next year, when the teams will be able to test these tyres with 2022 cars, which will have completely different aerodynamics, different brakes, and wheel rim covers as well.

"According to the latest simulations from the teams, the new cars will be around five tenths of a second slower than the current cars: a gap that they will probably manage to overcome anyway by the end of next season. Throughout the course of next year, we have 25 test days scheduled that will allow us to refine the tyres, if necessary, for the following season.

"So now, all that's left to do is wait to see the new 18-inch tyres in action on the latest cars!"

Starting the day on the C3 medium compound, Shwartzman got up to speed with ease and went to work helping the team find the car's balance for the day's run plan. A swap to C4 tyres saw the Russian complete 62 laps to finish the morning session, with a fastest lap of 1:26.980. Before going into the lunch break, Shwartzman completed his first practice pit stops in Formula 1, marking another milestone for the young driver.

After lunch, focus turned to high fuel runs on the C4 compound, banking over 50 laps in the process. The final tyre to be used was the softest C5 for qualifying simulations, adding to Shwartzman's tally before the chequered flag fell.

Mick Schumacher and official test and reserve driver Pietro Fittipaldi participated in the 18-inch test on Tuesday and Wednesday, respectively. The pair accumulated 223 laps in total, rounding out a sixth season of on-track action for the team.

"It's been very nice," said Schwartzman. "I'm very happy and I learned a lot which is very positive - I was always improving and progressing which is a very important thing.

"It's been a big pleasure to drive for Haas today, it's a different team and new environment but it went quickly. The team and people around were very nice and they were happy with what we've done today, we've done some different testing which was all good.

"It was just a very positive test and I'm happy. It's always the cherry on the cake when you leave the track and you're the quickest."

"We had our mule car with the 18-inch tyres for two days," added Ayao Komatsu, the team's director of engineering, "the first day with Mick and then again today with Pietro and the car ran without any major issues.

"We collected lots of data and we understand quite a lot about the 18-inch tyres, how they will work and what the limitations may look like. That's a good step forward ahead of winter testing next year.

"Today, we also ran Robert as part of the young driver test so he ran this year's car. Again, he did a really professional job, and his feedback was really good. We ran him at the end on the soft tyre and sometimes young drivers cannot get everything out of it, but he did. A very good two days at the end of a very tough season."

Bringing the curtain down on the season for Ferrari was Carlos Sainz, the Spaniard completing 151 laps, equivalent to 797 kilometres, around three times the distance of Sunday's race.

Before driving, the Spaniard was able to talk to team-mate Charles Leclerc and simulator driver Antonio Fuoco about their time in the mule car yesterday. Carlos tried different compounds, acquiring plenty of data, which will be useful when it comes to strategy management for next season. That is when a completely new generation of cars will take to the track, built to regulations aimed at enhancing overtaking opportunities and duels, thus making for even more spectacular racing.

"I'm happy with the number of laps we managed to do," said the Spaniard. "I'm more tired mentally than physically, because by the end of the season, you're super fit, but in your head, you have concentrate right to the end, because you are still driving a Formula 1 car.

"Being able to test these 18 inch tyres a lot was very interesting. There are obvious differences but I'd say that, overall, they are going in the right direction. From what I could feel today, I think it will call for a change to certain aspects of one's driving style, but after all, we already knew we would have to do this with the cars we will get to drive next year being completely different to the ones we used up until last Sunday."

Alfa Romeo brought its season to a close, and while yesterday saw Valtteri Bottas, taking part courtesy of Mercedes ahead of his arrival to the team in January, today Guanyu Zhou drove a total of 277 laps in a modified 2019 C38, the Chinese driver also completing 119 laps in the C41 on Tuesday as part of the Young Drivers' Test.

Check out our Wednesday gallery from Yas Marina, here.