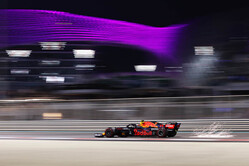 Lewis Hamilton set the pace earlier just as he did yesterday evening, the Briton setting a blistering pace, which was even acknowledged by Christian Horner.

Despite being off the pace by over a second for most of the session, Mas Verstappen eventually closed to within 0.214s, but in all honesty the Red Bull doesn't lok good on single-lap pace here unlike the Mercedes.

That said, the morning was not without its issues for Hamilton either, like many he was affected by the wind, traffic and the odd mistake, not to mention impeding Nikita Mazepin for the second weekend running.

If, as we suspect, Red Bull has given up on pole and is instead focussing on the race, it will be vital that Sergio Perez and Valtteri Bottas do their jobs his afternoon.

While the focus is naturally on the title protagonists we should not forget that there is still much to play for elsewhere on the grid, not least the battle between Ferrari and McLaren for 'best of the rest' and that between Alpine and AlphaTauri for fifth.

While these positions may not mean much to fans, due to the fact that they decide the prize money they mean a lot to the teams.

Having shown good pace yesterday, this morning Alpine lost out to AlphaTauri, while a strong, late lap from Norris signals hope for McLaren.

That aside, this weekend really is about just two men as we anticipate what both have achieved over the months since Bahrain. To arrive here, 21 races later on level points is quite something.

In the moments before the start of Q1 there is frantic activity in the Red Bull garage, with mechanics working on the underside and rear wing of Verstappen's car, while Perez' car doesn't even have a rear wing.

Christian Horner reveals that it's a "new problem" and certain parts have been changed as a precaution.

Back at the Red Bull garage the cars are both ready and raring to go, both cars sporting low downforce rear wings.

The lights go green and Verstappen is among the first out, along with teammate Perez, while the Mercedes pair remain in their garages.

Gasly goes second (23.967), ahead of Tsunoda, Perez, Sainz and Giovinazzi as the Mercedes pair head out.

All bar the Ferrari pair are on softs.

Ocon can only manage 11th while the Ferraris are 10th (Sainz) and 12th.

A bollard has been dislodged by Schumacher and the session is red-flagged in order that it can be removed.

Giovinazzi is first out, followed by the Ferraris.

An incident involving Ocon and Vettel has been noted, the Alpine driver appearing to have impeded the four-time champion while he was on a flying lap.

Vettel, along with Raikkonen, Latifi and the Haas pair comprise the drop zone, with Russell, Stroll and Giovinazzi hovering.

Hamilton goes quickest in S1 while Bottas posts a PB. The world champion maintains his pace in S2, as does his teammate. At the line Hamilton posts a 22.845 while Bottas responds with a 23.117.

Hamilton heads the queue as Q2 gets underway, the Briton followed by Bottas the AlphaTauris and the Bulls.

"This compound's (medium) going to need a bit more work," Hamilton is told.

As more drivers head out most are on mediums, only the Aston Martins opting for softs.

Leclerc, Sainz, Ricciardo, Ocon and Alonso, like the Aston opts for the red-banded rubber.

Stroll goes seventh (24.076) on the softs, currently the quickest driver on the red-bended tyre.

Tsunoda and Vettel both go wide at Turn 1.

Leclerc goes fourth with a 23.202, thereby demoting Bottas to fifth.

Stroll and Vettel are first out for the final run, the pair subsequently joined by the Ferrari duo.

Verstappen heads out on softs, will he post a time or merely abort the lap?

As the clock ticks down Leclerc heads a mobile traffic jam that includes Hamilton. "It's like a race out there," says Sainz as Hamilton passes Leclerc to head the queue.

There is a brief double yellow in S3 but it shouldn't affect anyone other than Vettel who caused it.

Gasly fails to improve on 12th, while Ocon goes 8th and Norris 7th.

Quickest of all in the final sector only, Verstappen goes quickest with a 22.800.

Ricciardo makes it by the skin of his teeth, while teammate Norris is seventh.

Replay reveals a very angry Alonso after losing out as a result of that traffic nightmare. At point, it was so bad, Vettel stopped his car, hence the waved double yellows.

Needless to say the incident will be investigated.