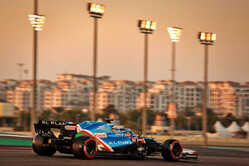 Following their first taste of the revamped Yas Marina circuit, the drivers were full of praise at the changes.

As expected, lap times are down while speeds are up, following the changes which mainly centred on the old Turns 11 to 14 section and Turns 17 - 20 in the final sector.

"I like the track and the changes they have made," said Lewis Hamilton, who set the pace in the evening session. "It has made the track much more enjoyable and much more flowing.

"It is still a bit of an unknown in terms of pace," he admitted, "but I am sure the race is going to be super close, like it has been in the previous races."

"I think it makes it a bit more fun to drive," added title rival, Max Verstappen who was quickest in the morning. "In general faster corners are more fun, so I do think they are a bit more positive."

"The changes are cool," said Fernando Alonso, "they are good to drive, and I think the track's a little bit more fun. It remains to be seen on Sunday if that will produce more overtaking, but I think on a single lap it looks more fun.

"It seems a good circuit layout for us with the modifications, so we are happy and we are ready to push tomorrow."

"It was very exciting to relearn the track," added teammate Esteban Ocon who split the Mercedes pair in FP2. "I mean, Abu Dhabi is like a home of Formula 1, we know the track so well, we test here a lot, and to revisit it like this has been interesting and I think it brings spice to it.

"Definitely, Turn 14 is a hell of a corner to take," he admitted, "you exit very close to the rail and I had quite a moment in FP1. Yes, so far it's been good fun."

"I think it's good, I like it," said Sebastian Vettel, who secured two of his titles here, beating Alonso on both occasions. "It makes the track a lot faster, so it's exciting.

"I think some of these strange corners have disappeared, and we have some new ones," he added. "Especially the banked one around Turn 9 is quite good fun. I'm still learning a little bit but it seems like good fun."

"It is definitely faster and has more flow to it," added teammate Lance Stroll, "which makes it cool and fun to drive."

"It is still a bit of an unknown in terms of pace," said Hamilton, "but I'm sure the race is going to be super close, like it has been in the previous races.

"It feels better than before with more flow and some increased overtaking opportunities," added teammate Valtteri Bottas.