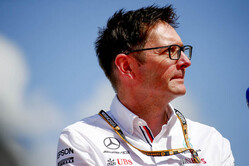 Following media reports that Mercedes might gamble on an engine change for Lewis Hamilton, the team's trackside engineering director, Andrew Shovlin has ruled out the move.

Quite what the idea behind the reports was nobody really knows as on the face of it such a move would represent a massive gamble, besides which, having turned down its engine for most of today's two sessions, when Mercedes did give it a quick boost even the power unit the world champion was running today appeared more than capable.

Asked if there was any intention of changing Hamilton's engine for the season finale, Shovlin was adamant. "It's not in the plan," he told Sky Sports.

"If we do that, something's gone wrong," he added. "It wouldn't feel like a good idea. That would only be if we suffered a big problem and, even at that, it wouldn't be Plan A if we did lose an engine."

Using a 'Friday' engine, for Saturday and the race Hamilton will revert to the so-called 'rocket' engine used to such great effect in Brazil.

That said Shovlin downplayed the speculation over the difference in performance offered by the power unit.

"It's not as big a deal as it's perhaps being made out to be," he said. "I think Red Bull were inferring it's a huge difference, I think Toto did the same at one point.

"It's a useful step in the right direction," he admitted, "but whether we had it in or not at the last race, it's not going to cover the kind of gap we were seeing to Max on a single lap.

"But it's a step in the right direction," he smiled.