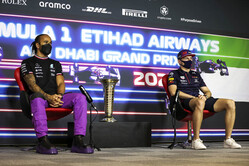 Finally, F1's owner, Liberty Media, has the showdown it has been waiting for, as title protagoinists Lewis Hamilton and Max Verstappen arrive in Abu Dhabi with exactly the same number of points.

While last week's Saudi Arabian Grand Prix did little for the sport's image let's not forget that over the last ten months we've had some classic racing.

Yes, people will popint to the clashes at Silverstone, Monza and Jeddah, and even those near misses, but for the most part it has been an exhilerating ride.

Understandably, considering wehat went before, many are expecting fireworks this weekend, not least race director, Michael Masi who has taken the unusual step of reminding drivers of the Interbnational Sporting Code under which they can be penalised for poor conduct.

Of course, with seven titles to his credit, Hamilton has been there, done it and worn the T-Shit, and while the young pretender Verstappen might not have the experience, just think back to the way he handled the pressure at his home race in Zandvoort.

While we might have expected to come here expecting the Mercedes to be the favoured car, at Jeddah Verstappen proved the Red Bull is its equal in terms of pace. Indeed, but for that mistake in the finmal corner in qualifiyng, the Dutch youngster would have secured pole position by as much as half-a-second.

As if all this wasn't enough, there is added spice this weekend courtesy of the track changes carried out since last year, changes made with the intention of promoting overtaking opportunities and increasing lap speeds.

The chicane that previously formed Turns 5 and 6 will is now bypassed with a straight, while the following hairpin has been brought forward and widened, increasing the speed carried onto the subsequent straight.

A long and slightly banked turn has been created to replace the technical complex of Turns 11-14 that existed previously, while near the end of the lap, the four tight corners that route the track around the Yas Marina hotel (Turns 17-20) have been opened up and made faster.

As usual, the race will begin just before sunset and run into darkness, with track temperatures falling quite quickly, in turn affecting tyre behaviour. FP2 and qualifying are the only two relevant sessions, with the other two free practices run in the heat of the day. 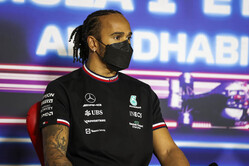 Last year's winning strategy, with the same tyre nomination, was a medium to hard one-stopper: the same tactic used by all the top three. Only three drivers stopped more than once, and it was the sixth consecutive time that the Abu Dhabi Grand Prix had been won from pole.

Other than the fight for the drivers' title, Red Bull still has a (slim) chance of claiming the constructors' title, though with a 28 point advantage Mercedes will be hard to beat.

McLaren could yet leapfrog Ferrari for third - and let's not forget it is the constructors' standings that decided the prize money - while AlphaTauri hasn't given up on beating Alpin for fifth.

This weekend marks Honda's last race before handing over to Red Bull Powertrains and one can imagine how muich the Japanese manufacturer would like to go out in style, especially when one rememberss those horror years with McLaren.

We alo say goodbye to the legendary Kimi Raikkonen, and teammate Antonion Giovionazzi, while George Russell will surely br keen to give Williams something to remember him by before heading off to join Hamilton at Mercedes.

And at the Black Arrows, what better way for Valteri Bottas to sign off than helping his team to another brace of titles.

All too often F1 makes it on to the front pages for all th wrong reasons, this year, courtesy of initiatives such as the Netflix documentary Drive to Survive, the sport has many more new fans.

Let's hope that Lewis, Max and the rest can give them a race to remember, something to keep them coming back for more.