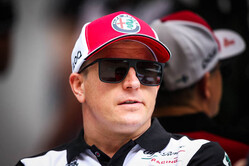 Alfa Romeo Racing ORLEN heads to the final race of the 2021 season, the Abu Dhabi Grand Prix, to mark the end of an era for the team and the sport. Ahead of the big regulation revolution of 2022, Alfa Romeo Racing ORLEN will honour and celebrate its two drivers, Antonio Giovinazzi and Kimi Raikkonen, as they compete in their final race of the season, with the Finn bringing an impressive two-decade career to a conclusion.

Every story has an end, and the final chapter of the 2021 season will take place under the lights of the Yas Marina circuit. The team says goodbye to its line-up of Raikkonen and Giovinazzi, a driver pairing that flew the team's colours for three years and has written some important pages of our history: we say goodbye and we say thank you for three years together, three years of hard work, happy moments, difficult challenges and learning. Three years of growing together, as a team.

The Abu Dhabi Grand Prix weekend will be one for looking back at these times, celebrating the career of a legend of the sport such as Kimi and the contribution of Antonio to the growth of our squad. There will be many moments to raise a toast, moments to savour, old friends to embrace; there will be emotions on and off the track as we create new memories to see our drivers off into the Abu Dhabi night. We will soon shift our full focus to next year, the new cars, the new tyres, a new everything: but this weekend, one last time, we'll go out with our team and fight for the result we deserve.

On Sunday, as the lights go out and the world championship is decided, we will race together once more, hoping to make it one of the best times. We enjoyed the sweet taste of points in Saudi Arabia, and finishing on a high would mean the world to all of us.

The curtain is about to fall on this season and, with it, so much of what we know will disappear. As the final chapter of this story is written, as the pen leaves its inky mark on the paper, we'll give all we have to make these words the best ones yet.

Frederic Vasseur, Team Principal: "The final race of the season is always a special moment, even more so this year when we head into some drastic changes, both within and without the team. We will obviously want to celebrate and honour Kimi and Antonio and their contribution to our team and the sport, but we also need to focus on the race weekend: there's a job to finish and we need to be fully committed to it until the final lap of the race, giving everything we have for a good result. Finishing with a strong performance would be a huge boost for the whole team as we head into the winter."

Kimi Raikkonen: "It's the last race of the season and, this time, the last race of my career, but I don't think too much about it. Of course, I know it will feel different once I cross the finish line and I know this chapter of my life is closed, but once I am in the cockpit, it will be a race like any other. I want to finish this experience with a good result, for myself and for the team, and I also want to enjoy this weekend with my family and my friends, who will be with me to say goodbye to Formula One."

Antonio Giovinazzi: "I approach Abu Dhabi full of confidence after such a good race in Jeddah. I wanted a result like that before the end of the season to show what I can do, to show that I have not given up and that I will keep on fighting until the final chequered flag; now I want another strong race to finish my three years with the team well. I owe it to all those who believe in me and keep supporting me and I owe it to myself, to finish the season with the result I know I can deliver. It will be an interesting weekend and I'm ready for it."