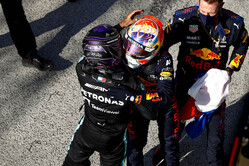 Looking to ramp up the drama from the outset, the FIA pits Max against Lewis at the official Thursday press conference.

Ahead of what sections of the media will no doubt bill the 'Showdown of the Century', the 'Fight F1 has been waiting for', the sport is clearly not missing a single opportunity to stoke the flames.

While pundits are already predicting that things will get nasty at Yas Marina, the sport has seized the opportunity to ramp up the ill-feeling and drama by pitting Max Verstappen against Lewis Hamilton in Thursday's official press conference.

As if this isn't enough, just before the pair are seen face-to-face for the first time this weekend, their respective teammates go head-to-head shortly before.

While topping the bill on Friday, shortly after the opening session, Christian Horner and Toto Wolff share the stage as Formula One refuses to leave anything to chance, keen to ensure that long before the lights go out on Sunday the atmosphere is at fever pitch.

Of course, they've missed out on the opportunity of putting Helmut Marko alongside Michael Masi, Anthony Hamilton and Jos Verstappen or the two teams' respective sporting directors.

Indeed, one wonders why they haven't gone the whole hog and scrapped the press conference in favour of arm wrestling.

In the wake of last weekend's shenanigans, the powers that be should be playing down any animosity, instead, in true Drive to Survive style they are ramping it up to the hilt.

Ironically, Verstappen, who is refusing to take part in the Netflix series because it paints a false picture of the relationships within the paddock, has allowed himself to be placed centre stage - almost as the pantomime villain - without the opportunity for rebuttal.

Meanwhile, TV pundits are busy rehearsing their lines, expressing their hopes and fears, outwardly wanting it kept clean and the championship decided on track in the best racing traditions, all the while hoping that come Sunday it is the exact opposite and that the gloves are well and truly off.

And while officials should be looking to calm the situation, it appears they are actively, and purposely, fanning the flames.