"He's over the limit," says Hamilton of rival Verstappen 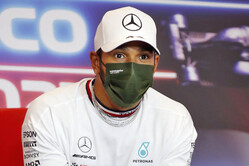 Jeddah winner Lewis Hamilton is left with a bad taste in his mouth as he accuses title rival Max Verstappen of thinking he is above the rules.

The Briton's comments at the end of a race which will once again take the spot on to the front pages for all the wrong reasons, for along with the clashes with the barriers and rivals cars, drivers, team bosses and sporting directors traded verbal blows.

Having accused Verstappen of brake testing him on the 38th lap of the race, along with the Dutchman Hamilton has been summoned by the stewards, and as we await their decision, the stage is set perfectly for the season finale, with the pair (currently) level on points and clearly having run out of respect for one another.

"For me, I really had to try and just keep my cool out there, which was really difficult to do," admitted Hamilton at race end.

"I've raced a lot of drivers in my life, in the 28 years, I've come across a lot of different characters," he continued. "There's a few at the top which are, yeah, over the limit. Rules kind of don't apply, or they don't think of the rules."

Asked if he included Verstappen among these, he replied: "He's over the limit, for sure.

"I've avoided collisions on so many occasions with the guy, and I don't always mind being the one that does that, because you live to fight another day. Which I obviously did.

"Today I just tried to do my talking on the track," he added. "Keep the car in between the white lines and do it the right way.

"Then he obviously brake-tested to try, I think, to get the DRS into the last corner to overtake me again back into Turn 1. In the commotion I thought I'd lost my wing."