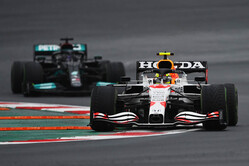 Though we positively refuse to go down the hyperbolic route of certain broadcasters, we really do feel that we are being spoiled this season.

Maybe it's because Mercedes has been so dominant for so long, or simply because we've all been moaning for so long, but the fact is this is really shaping up to be a classic season.

While it is too much to hope for an Interlagos 2008 scenario whereby the title is decided on the final lap in (groan) Abu Dhabi, Max and Lewis do appear determined to take this all the way.

As if this wasn't enough, Lady Luck and the Weather Gods have been playing their part, throwing the odd spanner in the works to spice things up a little further at a time Ross and his pals are working overtime to try and do a similar job with gimmicks.

Heading into today's Turkish Grand Prix the title fight is finely balanced with just 2 points separating the combatants, and just to add a little more spice Lewis has an engine penalty.

Having failed so miserably to put up a fight in Russia, will Valtteri make more of an effort today to hold off Max, or has the Finn already thrown in the towel as far as Mercedes is concerned.

Of course, a win, other than helping his teammate and his team would also give the Finn his first victory of the season, but he's up against a very, very determined Dutchman.

Though he has been off the pace all weekend, Max will know that today is the perfect opportunity to retake the advantage in the championship, and while he might be hoping his rival is delayed by the midfield mob he cannot rely on it, furthermore he knows that an emphatic win will get under his rival's skin.

There's damp in the air and an hour before the race start there is every chance that it will be declared wet, which will be bad news for the likes of Leclerc.

Alonso will be good to watch whatever the weather, while Perez, who had another dismal qualifying, has a golden opportunity to shine.

While it is going to be interesting to watch Hamilton's progress through the field, keep an eye on Sainz and Ricciardo who are both starting from the very back due to engine change penalties.

Schumacher believes that today is his best opportunity to open his points account and surely nobody would begrudge the youngster, however it is a mighty big ask.

The driver parade is a somewhat miserable affair, the drivers all sporting warm clothing in the cold drizzle.

The fastest way to approach the race is a two-stopper, with one stint on the medium and two hard. This is because two stops minimise graining and wear, allowing drivers to push harder during shorter stints. Of the leading ten, all but Tsunoda are on the medium.

Next-quickest is a one-stopper, going from the medium to the hard (and the next-fastest strategy after that involves doing two stints on the medium and one on the hard). So the nine drivers who got through Q2 on the medium tyre, and will therefore start the race on this compound, have a few options available to them (depending on which tyres they have available).

However, a more aggressive two-stop 'sprint' strategy using the soft tyre to start the race might also pay off under the right circumstances - so the strategy is finely balanced.

Those starting on the soft tyre will need to stop relatively soon into the race due to the high wear rates on this compound (also because of the pressure-washed track surface) but after that they also have options.

The pit stop time loss penalty in Turkey is one of the lowest of the year at 20 seconds, which works in favour of a two-stopper: especially if it turns into an eventful race.

On the other hand, as mist envelops the circuit just thirty minutes before the start all this is likely to go out the window.

Indeed the pitlane opens and as the cars head out they are sporting Inters.

"Perfect for intermediates," confirms Verstappen, while Bottas says that it seems to be raining at every race these days. Ironically, Vettel is sporting a "Water = Life" T-shirt.

As the drivers gather for the national anthem, Adrian Newey is studying the Red Bull, scribbling away in his notebook.

As Bottas climbs into his Mercedes, his crew is working on his front-right brake drum.

Ahead of the formation lap, Russell predicts that it will be Inters for much of the race.

"I don't know whether to go on the inside or outside at Turn 1," says Hamilton, his message obviously meant for someone else.

All are starting on the Inters. "The weather will be like this for quite a while," Alonso is advised.

They head off on the formation lap. All get away cleanly.

They're away. Bottas has the better start and leads into Turn 1 as Leclerc is almost alongside Verstappen.

Behind Leclerc, Alonso, Gasly and Perez are side-by-side into the opening corner, and courtesy of a nudge from the Frenchman Alonso spins.

"What a stupid guy, Gasly," says the Spaniard. "I'm in a sandwich," says the Frenchman.

At the other end of the field, Ricciardo and Sainz are battling, making short work of Mazepin.

Sainz is 17th, ahead of Ricciardo, Mazepin and Latifi.

Schumacher spins after being clouted by Alonso and drops down the order.

Hamilton makes a move on Tsunoda but the AlphaTauri driver slams the door firmly shut.

Out front, after 2 laps, Bottas has built a 1.3s lead while Verstappen is 1.8s clear of Leclerc.

Verstappen reports gearshift issues as the stewards are looking at the Alonso/Gasly clash and also the Alonso/Schumacher clash.

After just 5 laps drivers are being told to cool their Inters.

Sainz passes Russell for 14th as Tsunoda continues to hold off Hamilton.

Sainz passes Raikkonen, who appears to be enjoying himself, as Verstappen falls 1.8s behind the leader.

Tsunoda doing a sterling job of holding off Hamilton, but the Mercedes drivers goes around the outside in Turn 3 to take 8th.

As Sainz passes Gasly for 12th, Gasly gets a 5s time penalty for that first corner clash with Alonso.

Alonso is handed a 5s time penalty for causing a collision with Schumacher.