"Again taken out by a Mercedes," sighs Verstappen 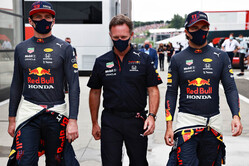 Max Verstappen manages to keep his emotions in check, as Mercedes strikes for the second successive race.

Those sections of the media hoping for another high-profile clash involving Mercedes and Red Bull at the Hungaroring's notorious first corner, were not to be disappointed.

However, rather than Max Verstappen issuing 'payback' for Silverstone, the world watched on open-mouthed as Valtteri Bottas got ahead of himself and proceeded to take out not one, but both Red Bulls, in addition to Lando Norris.

Though, unlike his teammate, Verstappen was able to take the restart, such was the damage to his car he was never going to be competitive.

Meanwhile, Lewis 'Mr Teflon' Hamilton, despite dropping to last shortly after the restart, fought his way back to third, and, adding insult to Red Bull injury, was promoted to second following Sebastian Vettel's disqualification.

"Again taken out by a Mercedes," sighed Verstappen at race end, "that's not what you want.

"You could see Valtteri just completely misses his braking point and causes a big crash," he added.

"From then on, I was missing the whole side of my car and the whole barge board area, the floor was damaged as well so it was almost impossible to drive to be honest. I still tried my very best and I scored one point, so it's at least something, but it's of course not what we want."

As a result, Verstappen has lost the lead in the championship, having scored 5 points from the last two races. Furthermore, having taken on a new engine ahead of the race he faces the threat of grid penalties later in the season.

"These moments, it doesn't do anything to me, it's just disappointing," he said. "I know that when we go again, I will be there again, I'll try my very best and I hope my car's going to be competitive. But we'll find out.

"It's a lot of freak moments at the moment that cost us a lot of points," he added. "They're of course very quick, but we will focus on ourselves, we keep pushing and we'll see where we end up."