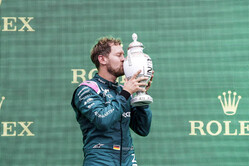 Aston Martin boss, Otmar Szafnauer has confirmed that the team has notified the FIA of its intention to appeal Sebastian Vettel's disqualification from the results of the Hungarian Grand Prix.

The German, who finished second to Esteban Ocon, was disqualified hours after the race when FIA inspectors were unable to remove the mandatory litre of fuel from Vettel's car.

Though the British team claimed there was 1.44 litres remaining, officials could only extract 0.3 litres and as a result Vettel was disqualified.

"I can confirm an intent to appeal," said Szafnauer, according to Motorsport.com, in the wake of the decision. "So once we learn more, then if we have grounds we will appeal, and if not, we'll drop it. But we have 96 hours.

"By all of our calculations, there should still be 1.44 litres of fuel left in the car after the 300 millilitre sample was taken," he insisted. "And we just have to show the FIA that it was in there, and 300 millilitres is enough for their fuel sample. And that will be the basis of the appeal.

"So the car will be impounded. So we'll just go in and find the fuel and measure it. We'll figure it out."

As opposed to running out of fuel in the moments after the end of the Grand Prix, which left Vettel stranded on track, Aston Martin believes it was fuel pump failure.

"It looks like it, I don't know," said Szafnauer, "we haven't taken it apart yet. But for some reason the lift pumps wouldn't get the fuel out of the car."

"We measure the fuel that goes in," he continued. "And the fuel flow meter that we have in the car, which is mandated by the FIA, measures how much fuel gets used.

"So the difference between what went in, and what's used, is what's left. And that's how we know there's 1.74 litres left.

"We have that, the FIA work to the fuel flow meter, they have all that data, we supply them with the data of how much fuel we put in, they have the ability to check that at any time. So all that data is available."

Minded that the rules state that the litre of fuel re of fuel has to be physically retrieved from the car, Szafnauer replied: "It is an old rule that goes back to the days before we had all this metering and all the measurements."