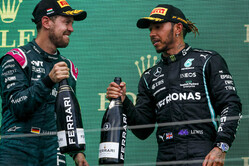 Sebastian Vettel: "Second place is a great result and we can be proud of our performance, but when you are that close to victory, you always want more. At the start of the race, I could see the contact ahead of me, so I took the inside line and found myself with the leading cars. From then on, I felt like I tried to take the lead for the entire 70 laps, but it is so difficult to overtake here. I think we were quicker for most of the race, but there was not enough of a difference to make an overtake because it was very hard to follow in the dirty air. I tried to pressure Esteban [Ocon] into a mistake, but he did not make a single one. Congratulations to Esteban, it is his day and I am very happy for him. He deserved the victory. I will sleep well tonight knowing I gave it my all. We have a good fight on our hands in the midfield with Alpine and AlphaTauri, so we will take the summer break to rest up and come back ready to fight in Belgium."

Lance Stroll: "Congratulations to Seb and the team for our second podium of the season, everyone in the team has been working so hard and I am happy for them. On my side, it is really frustrating to have to retire so early in the race. Once the incident at the front of the field happened, I took the line to the inside to try and avoid making contact, but I locked up under braking. As soon as that happened, I knew I would not make the corner because it was so slippery and tricky out there. I did all I could to avoid contact but, unfortunately, my race was over. We will take the break to regroup and we want to come back stronger in Belgium."

Otmar Szafnauer, CEO & Team Principal: "Formula One is all about tiny increments, and it was a couple of tiny increments that cost Aston Martin Cognizant Formula One Team our first Grand Prix win today. Had our lap-36 pit-lane time-loss been just a fraction of a second less, Sebastian would have jumped [Esteban] Ocon and would surely have held on to win. Having said that, second place is a great result for us, and Ocon drove mistake-free. Again, Lance was unlucky, for he made a truly sensational start, passing a lot of cars, including Sebastian, and, had he not been involved in a Turn One shunt, we may well have had two drivers on the podium today. However, faced with a tangle of cars in front of him, Lance was left with nowhere to go, and that was that. But his time will come, mark my words. Finally, I want to pay tribute to everyone who has worked so hard to make today's result possible, both here in Hungary and back home in the UK. Next up is the summer break, then Spa!"