Bottas: It was my bad today 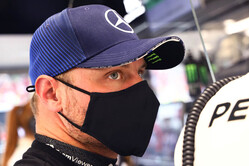 Valtteri Bottas apologises for causing incident that turned the Hungarian Grand Prix on its head.

After a poor start which saw him lose positions to Lando Norris and Max Verstappen, and even allow Sergio Perez and Pierre Gasly to close in, Bottas lost it under braking for Turn 1.

Hitting Norris from behind, which forced the McLaren into Verstappen, the Finn then careered into the second Red Bull of Perez.

Despite the mayhem that ensued, Bottas was only investigated for the clash with Norris, the stewards hitting the Mercedes with a 5-place gird penalty for the Belgian Grand Prix.

"I had a poor start with lots of wheelspin off the line, lost a couple of places and then into Turn 1, I was right on the gearbox of Lando and locked the wheels," explained Bottas.

"I misjudged the braking point," he admitted, "it's always difficult starting a race in those conditions, you're always ‘guesstimating' grip levels and today I got it wrong.

"I've spoken to Lando and Checo to apologise, it was my bad today and sometimes you have to hold your hands up."

"I'm angry because I was in third place," said Norris. "I had a very good start and on lap one it is game over already.

"There are four or five people here because a couple of people just try way too hard," he continued, gesturing towards the media pen. "They think they can be a hero, and out-brake themselves and it ruins everyone's race.

"Everyone knows that it is slippery, it is wet," he added. "Everyone makes mistakes at some point, and sometimes it is on lap one, but it is also lap one. It is a long race. Bottas has a much quicker car, and he probably would've passed me at some point in the race.

"I don't know what goes through their minds sometimes to try and do things like that."

"Bottas made a big mistake and braked too late into Turn 1 which took out a lot of cars, including me and caused bad damage to Max's car," added Perez.

"He came to me and apologised as he knew it was his mistake, and although it was not on purpose and is how racing goes sometimes, it doesn't make a difference to the result for us right now as the large amount of damage ended our race and opportunity for points."

"A difficult start for Valtteri," admitted Toto Wolff, "he suffered wheelspin off the line and found himself sandwiched into the first corner and missed the braking point.

"A small mistake with large consequences and damage to several cars," he added. "I'm sorry to McLaren and Red Bull, to lose out in an accident like that at the start of the race is tough to take."