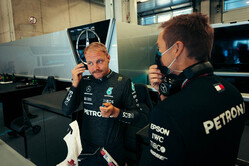 Valtteri Bottas has been handed a 5-place grid penalty for causing an avoidable collision at the start of today's Hungarian Grand Prix.

The stewards decision that "immediately after the start, in the braking zone to turn 1, Bottas collided with the rear of Norris and that despite the track conditions the Finn was fully to blame for the collision", doesn't even begin to tell the story.

Indeed, as he lost the Mercedes heading into Turn 1, having already lost a number of position following a poor start, he set in motion a chain of events that turned the race on its head.

Hitting Norris from behind - the offence for which he received the grid penalty - the McLaren driver then collided with Max Verstappen, while Bottas subsequently hit Sergio Perez.

With the Mexican out on the spot, damage incurred by Verstappen, not to mention the position lost in the incident, meant his race was compromised from the outset.

In addition to the grid penalty, Bottas received 2 penalty points, thereby bringing his 12 month total to 4.