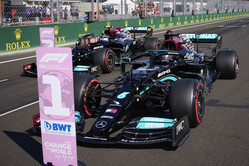 Lewis took his 75th pole position for the Mercedes F1 Team with an incredible lap at the Hungaroring. Valtteri delivered an impressive performance to complete the lockout and will start tomorrow's race in P2.

Both drivers will start tomorrow's race on the Medium compound tyre, in contrast to the cars behind them.

Lewis claimed his eighth pole position at the Hungarian Grand Prix, breaking the record he shared with Michael Schumacher for most pole positions at this Grand Prix.

Today was the 214th pole position for Mercedes-Benz power in Formula One, surpassing Renault as the engine supplier with the second-most poles.

Lewis Hamilton: It was an amazing qualifying lap, that last one. There's been amazing teamwork from everyone this weekend, Valtteri included. We're just trying to push the car forwards, developing constantly and the guys back at the factory have been working flat out, leaving no stone unturned. It's been amazing to see everyone coming together, rallying each other and pushing forwards, and I appreciate the great support I have here.

The Soft tyre is worth something like five metres down into turn one and it's a long way down to the first corner so it'll be exciting tomorrow - it's surprising to see all the guys behind us on the Soft tyre. It's definitely great having a front row lockout for our Team, it's the first one in a long time and I just feel so grateful to everyone back at the factory.

Valtteri Bottas: We saw some good progress in performance at Silverstone and it seems to be carrying on here in Budapest which is great to see. The conditions are pretty unique here with the heat and we've performed well so far. As a team, we're in a good position with the Medium tyre for the race tomorrow - Red Bull will have an advantage at the start on the Soft but we will be able to go longer in the first stint so we're set for an interesting race. We need to have strong focus at the start, that's for sure.

I'm a little bit disappointed with my first run in Q3, Lewis had an amazing lap and I didn't feel as confident with the car as I was at other points through the weekend. I lost a little bit of rhythm with the Medium tyre in Q2 and it wasn't easy to switch back to the Softs in Q3 and go all-out attack. But my lap was decent and enough for P2 so I'm relatively happy.

Andrew Shovlin: It's great to get another front row lock-out; we didn't really know what to expect coming here, we thought that we'd be in the fight for pole but the margin is a surprise. We wanted to get the cars on the Medium tyre for the start, that was a bit tighter than we would have liked in Q2 with Valtteri but the gamble paid off. Once the race is underway, the Medium should be the better tyre but its weakness is always going to be the start and the grip in the opening corners - that has to be a focus for tomorrow. The race is going to be really tough on the tyres and that could open up options on strategy but the car had good pace on Friday in hot conditions so hopefully we can carry that into the race.