No issue with "gamesmanship", insists Horner 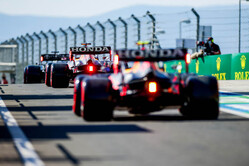 While sections of the crowd might not agree, Red Bull boss, Christian Horner insists he has no issue with Lewis Hamilton's apparent gamesmanship in the final moments of Q3.

As the drivers headed out for their final runs, the world champion was ahead of the two Red Bulls. Watching in his mirrors, the Mercedes driver proceeded slowly appearing to deliberately back up the two cars behind.

He then headed off only to slow down again later in the lap and once more back up the two Red Bulls.

As the clock ticked down, Hamilton made it to the line in time to begin another flying lap, as did Verstappen, however Perez failed.

Even though he failed to improve his time Hamilton took pole, ahead of his teammate, Valtteri Bottas and Verstappen. And while both had improved their times, neither able to overhaul the Briton.

As they climbed from their cars, sections of the crowd voiced their disapproval of Hamilton's tactics and booed the Briton, continuing to jeer him during the grid interviews.

However, when the seven-time world champion said the booing merely fuelled him, it appeared to cease.

Speaking at session end, when asked about Hamilton's tactics, Christian Horner, who has been embroiled in a war of words with Mercedes ever since Silverstone, described it as a "bit of gamesmanship".

"Lewis has got a hell of a lap in the bank," he said, "and then obviously he's just backing things up, up, up, and he doesn't want to give obviously our cars a clean run.

"It's his right to do that," he added. "He's got the track position. We haven't got a major issue. It's all about tomorrow now."

Asked if his team would have adopted similar tactics, Horner replied: "I think we've have probably focused more on the preparation of our tyre, because you can see his lap time was nowhere near his best qualifying time.

"He was obviously more interested in what was going on behind. But that's part of the game."