Hamilton edges out Verstappen by 0.088s in final practice 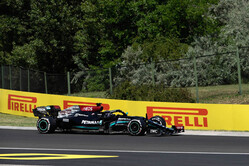 Ahead of today's sole practice session, the air temperature is 26 degrees C, while the track temperature is 50 degrees. Once again, it is bright, sunny and hot.

Though Verstappen's engine got the all clear yesterday – the Red Bull driver having run his Silverstone power unit in FP1 – there was clearly an issue at Ferrari, the Italian team having changed Sainz' engine overnight and thereby breaking the curfew.

Worse still, it is the Spaniard's third unit of the season, consequently with 12, or is it 11 or 10 races remaining, grid penalties appear inevitable.

While Verstappen was quickest yesterday morning, he slipped to third, behind the Mercedes pair, in the afternoon, the youngster clearly unhappy with his "understeery" car.

Best of the rest appeared to be the Alpines, and while Gasly looked strong in the AlphaTauri it appears to be business as usual as far as McLaren and Ferrari are concerned.

It's going to be a busy day for Tsunoda, having crashed out in the opening session yesterday, he only managed to get out for one hot lap in the second.

The lights go green and Mazepin is first out, followed by his teammate. While the Russian is on mediums, his Haas teammate is on softs.

As the Haas pair post the first times of the day, they are joined on track by Raikkonen, Tsunoda and Sainz.

A new engine for the Spaniard and seemingly new brakes for Raikkonen.

Sainz goes quickest with a 19.443, ahead of Raikkonen and Tsunoda, the Spaniard and Japanese on mediums while the Finn is on softs.

Thirteen minutes in and Hamilton (softs) is the sixth driver to head out, as Raikkonen raises the bar with a 19.267.

Though quickest in S1, Hamilton has a scrappy second sector, nonetheless he crosses the line at 18.587 to go top.

In the midst of the mother of all lock-ups, Sainz admits that his brakes are "a bit hot".

After a slow start to the session, suddenly another seven drivers head out, among them Norris, Perez, Vettel and Alonso.

Verstappen heads out on softs, as Gasly and Bottas remain the only no-shows.

Verstappen goes quickest in S1, the Dutchman maintaining the pace in the second sector. At the line he stops the clock at 17.510 to go quickest by 0.694s. Like Hamilton he is on softs.

Leclerc goes fourth (18.901), ahead of Norris, Ocon and Perez as, for the second race weekend running, Latifi reports a broken mirror.

Russell reports that overnight changes have left him struggling with the rear of the Williams, particularly in Turn 5.

Told there is time to be gained in Turn 4, Alonso replies: "Everywhere, everywhere!" The Spaniard is currently 12th, around 0.1s off his teammate's pace.

Meanwhile, Ricciardo is told he is losing time in braking for Turn 12.

As Hamilton heads out on old softs, he is advised that his "diff magic is still engaged".

On fresh softs, Norris improves to third, ahead of Hamilton, with a 17.772 as the qualifying sims get underway.

However, the session is red-flagged when Schumacher loses the rear of the Haas and crashes side-on into the barriers at Turn 11. "I'm OK," he breathlessly reports. "I'm really sorry about that," he adds.

As was the case in Monaco, it is likely that Haas will opt not to bother with repairing the car for qualifying and instead focus on the race.

The session resumes with just nine minutes remaining, and understandably there is a queue of cars in the pitlane.

However, Verstappen is not amongst them, indeed there are some worried faces at the rear of the Dutchman's Red Bull.

Whatever it was, Verstappen is sent out, leaving Norris and Mazepin as the only drivers yet to appear.

Drama in the pitlane as Giovinazzi is released into the path of Stroll, the Canadian clearly clouting the front wing on the Alfa Romeo.

Verstappen goes quickest in S1 as the stewards reveal that they will investigate the Giovinazzi incident.

For reasons known only to himself and his team, Norris – currently sixth – is on mediums.

As Sainz improves to 4th, this demotes Perez to seventh.

The stewards have also noted an incident involving Gasly and Giovinazzi, the Alfa driver appearing to drive very slowly on the racing line, thereby wrecking the AlphaTauri driver's hot lap.

Consequently, Giovinazzi is under investigation for two different incidents.