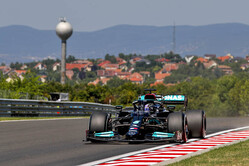 Verstappen was quickest earlier, edging out Bottas and Hamilton, with Sainz fourth ahead of Gasly and Alonso.

The session was red-flagged when Tsunoda went backwards into the barriers, the Japanese seemingly caught out by the wind - and a touch of overenthusiasm - in Turn 4.

The lights go green and Raikkonen - who handed his car over to Robert Kubica for FP1 - is first out. Giovinazzi was sidelined for much of the session due to a technical issue.

Verstappen is the first of the Bulls to emerge, while at AlphaTauri work continues on Tsunoda's car.

In FP1, Verstappen was running the engine last used at Silverstone, and it appears to have passed the test with flying colours.

Hamilton goes second with an 18.697, but is almost instantly demoted when Verstappen crosses the line at 18.581.

One driver seemingly missing in action earlier was Ricciardo, who appeared to take a step forward last time out.

Though he struggles in the opening sectors, Perez is quickest in S3, crossing the line at 18.971 to go fourth.

Gasly improves to fifth with an 18.998, as Perez complains of "a lot of understeer".

"Still struggling with the same things," replies Verstappen when asked how the balance is.

The Aston Martin and Williams duos are the first to switch to softs.

Despite being quickest in S1, Stroll can only manage an 18.320 to go fourth.

Hamilton and Bottas head out on the red-banded rubber, as Schumacher improves to 15th.

On softs Gasly goes quickest with an 18.113, but his time in the spotlight is sure to be short-lived as the Mercedes pair are about to begin their first flying laps.

Mazepin is advised that he has a right-rear puncture.

As Verstappen begins his first flying lap, Norris improves from 17th to 6th with an 18.313.

Verstappen goes third with a 17.310, the championship leader posting PBs in all three sectors.

"So understeery, it's incredible," reports Verstappen, who is 0.298s down on pace-setter Bottas. Perez has similar issues.

With 20:00 remaining, it's Bottas, Hamilton, Verstappen, Ocon, Perez, Gasly, Alonso, Vettel, Norris and Stroll. Tsunoda has yet to emerge.

"Every time I try to turn in I feel I'm losing the rear," says Verstappen. "I'm boxing... it feels completely broken."

With just over two minutes remaining, Tsunoda finally heads out. The youngster will have time for just one flying lap.

The session ends, and Verstappen is out of his car and storming to the back of the garage before his crew have even begun to wheel it back into place. He is not happy.

Though thunderstorms are predicted for Saturday and Sunday, the Weather Gods have toyed with us too many times this year, so let's just wait and see.